As you are no doubt tired of hearing, Shipfax started as a typed newsletter (yes using an actual typewriter) in January 1986. The ships back then were quite different in many ways from what is calling in Halifax these days, so here is a random selection from 1986:

The large self-unloading bulk carrier Marcona Conveyor was actually on its last legs when it arrived here for bunkers January 10, 1986. It had transferred 25,000 tons of iron ore pellets to the laker Black Bay in Sept-Iles, QC. This reduced its draft sufficiently to carry on to Contrecouer where it unloaded he remaining 42,000 tons. It then sailed for Auld's Cove (Cape Porcupine) NS where it took on a cargo of crushed stone.

The sweeping bow of the ship is a sure sign of Livanos ancestry. The third largest Greek shipowner, Stavros Livanos was close behind his two sons-in-law, Stavros Niarchos and Aristotle Onassis.

Built as a conventional bulker of 36,360 grt, 70,478 dwt in 1970 by Hakodate Dock Co as Fontini L. for a Livanos single ship company. It was sold in 1971 and renamed Aragonite Islander. After conversion to a self-unloader in 1972 it was renamed Marcona Conveyor and was to be used primarily to carry bulk sand.
On September 3, 1986 it arrived in Kaohsiung for scrap.  Sixteen years was a relatively short life for such a ship.

There was lots of grain moving through Halifax in the spring of 1986, due to favourable rail rates.
One such ship was a more typical Livanos vessel, Tatiana L. 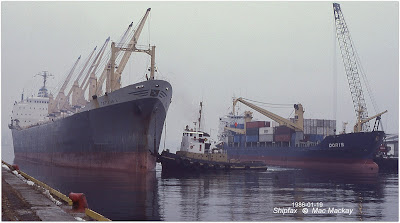 Bearing the sweeping Livanos bow, the ship arrives in ballast at pier 27 assisted by Point Vibert. The container ship Doris unloads for Eimskip at pier 31, using a shore side crawler crane.

Point Vigour begins to work the ship's bow around for sea as it sails fully loaded on the first of two trips with grain for Cuba.

Many shipowners made a slow transition into the container age, hedging their bets, by building ships that could carry bulk cargo, general cargo and containers - sometimes at the same time. Companhia de Navegacao Maritime Netumar of Brazil was one of those. Its Alison was classed as a bulk carrier of 15,220 grt and 25,912 dwt. But it was rated for 648 TEU and carried four 25 tonne cranes. It was built by Cia Comercio e Navegacao (CNN) at the Maua Shipyard in Niteroi, Brazil. 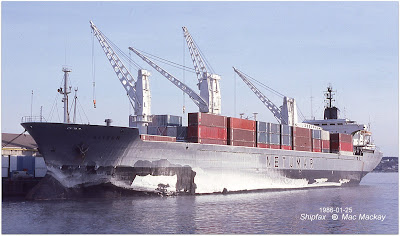 Alison picked up some very un-Brazilian frozen spray on its way to Halifax.

Netumar ships often carried bauxite or alumina in bulk to Canadian ports, and carried some containers at the same time. On this trip Alison was in Halifax to load cargo from Mersey Paper. The ship was deemed to be too large to tie up at the company's mill in Brooklyn, NS and so diverted here.
The ship served Netumar until 1993 when it became: Dalva, 94: Seram, 98: Negril Bay, 02: Elini K, 04: DD Master until arriving in Alang January 29, 2010 for breaking up.

There were many standard class ships in the 1970s and 1980, built to replace the World War II standard ships that had reached the end of their lives. One well known type being the Flensburger built by the Flensburger Shipyard in (West) Germany. Family C. was built as Olga Jacob in 1970 and became  Franz Xavier Kogel in 1976. It had only recently changed hands again in 1985 when it arrived at pier 28 to load grain, flying the Panama flag. 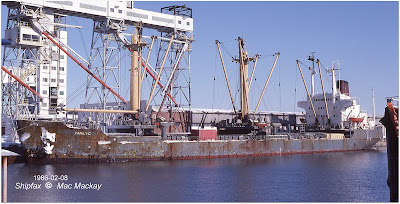 Handy sized ships of 9194 grt, 15,245 dwt, this Flensburger was equipped with one 80 tonne, five 22 tonne and ten 5-10 tonne derricks. It could carry 230 TEU, but was essentially a traditional general cargo ship that could also carry bulk cargoes.
Shortly after leaving Halifax it was sold to the Government of the People's Democratic Republic of North Korea and became  Mor An Bong. In 1988 it became the Chinese Fu Jiang . Its history after that is a little murky, but was renamed Li Long in 1995 and was largely unreported until 2014 when it emerged again under the ownership of the CCC Guangzhou Dredging Co Ltd. If it is still in service, it is a remarkable feat for a ship that was built as an economical replacement for war surplus vessels. Not noted as a particularly durable class, containers soon made them obsolete in most of the world's trades.

Winter ice presented hazards and brought many ships to Halifax - some under their own power and others not. One odd arrival in 1986 was Urrida a small general cargo ship of Danish origin. It has been beset by ice, due to lack of engine power, while bound for Becancoueur, QC, with a cargo of bagged cryolite from France. The mineral was used as a flux in aluminum production and came mostly from Greenland. [It was reportedly depleted there by 1987 and is now very rare and expensive. A synthetic material is now used instead].
The ship turned back, and on arrival in Halifax it was arrested by the charterer and the cargo unloaded and sent on by rail. Once matters were settled, Urrida sailed in ballast for St. Lawrence ports on March 28. The ship was apparently undamaged.
. 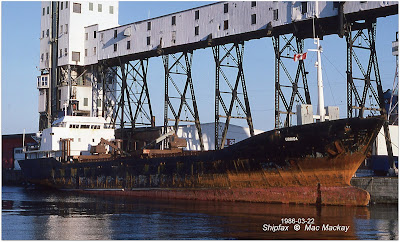 Another ship that tangled with ice was Caravel Star, but with more serious consequences. Built as Nagfan Mercury by Koyo Dockyard in Mihare, Japan in 1975 it was sold and renamed in 1984. A traditional bulker of 15,549 grt, 26,901 dwt, it had six 15 tonne derricks to serve its holds. It arrived in Halifax March 4 and two days later entered the Scotiadock floating drydock at Halifax Shipyard. Its propeller was removed and rebuilt and two blades were replaced and the other two straightened. It left the drydock March 21 and tied up at pier 27. 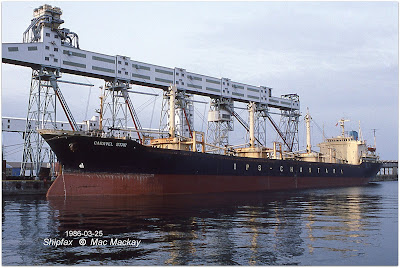 I tried out my new 28mm wide angle lens to capture Caravel Star after it was repaired and moved to  pier 27 to load grain.
It was finally able to sail on April 3 but did not last much longer. Sold later in the year it was renamed Pal Pal and arrived in Masan, South Korea  February 19, 1987 where it was broken up.