As per my earlier post APL Salalah became the largest container ship to call in Halifax when it arrived early this morning. Also as predicted, it arrived in the dark and is due to sail in the dark too, thus preventing photos of it underway.

Without scaling fences, climbing communication or electricity towers or trespassing on private property (for more than a few seconds), I did squeeze off a few photos to give an idea of the scale of the ship. 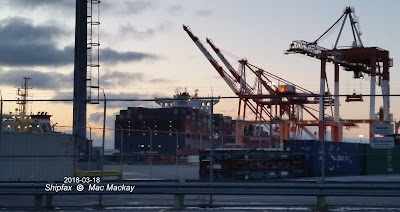 The ship was alongside and tied up by sunrise, but the cranes had not started work yet. By my estimation the ship could have loaded another tier or more of boxes.

Although using up all of berth 41 ( 333m / 1,093ft ) and stretching into berth 42 (same length) at  347.05m long (1138.45 feet) APL Salalahleaves room for a smaller ship at pier 42. Macao Strait is barely visible at the far right, loading for Melfi Lines. Thus only two cranes were available for the large ship - surely a less than desirable situation.

If anyone needed a comparison in size between a 10,960 TEU ship of 128,929 grt and a "normal" container ship, there was this afternoon's arrival of YM Evolution a regular caller since last May on THE Alliance AL1 service. With a capacity of a mere 4662 TEU, the 47,952 grt ship is supposedly of a size that is threatened with extinction by the larger ships.

YM Evolution rounds George's Island heading for Bedford Basin. Its tethered escort tug Atlantic Fir is already made up astern and Atlantic Willow is just coming alongside for the trip through the Narrows. The irony in the ship's name is that evolution may spell its exctinciton.


In fact there are many trades, such as transatlantic that currently depend on frequency more than capacity. Being able to maintain a weekly service efficiently means that "smaller" ships of less than 5,000 TEU will still find niches, where the economy of scale that the giants provide is not a factor. The risk is that with ownership consolidations, there will be fewer and fewer (but bigger and bigger) ships and shipping lines, calling in fewer and fewer ports, leaving some ports out in the cold unless they can provide exceptional service.

It is only a matter of time before more bigger ships start coming. The extension to Halterm pier C, berths 41-42 was made to accommodate two large ships at once, but that was obviously not enough to work two 10,000+ TEU ships. When the next leap occurs to to the 13,000 to 15,000 TEU range, then not even smaller ships will be able to dock at Halterm when a big ship is in.

I have sighted drilling and sounding vessels working in the area over the last few days, so some plans are afoot - but they have not been revealed to the public yet.