The PCTC (pure car and truck carrier) Zenith Leader arrived for Autoport this morning. Tugs had been quite busy early with arrivals and departures, and so the ship took its time and loitered north of George's Island until a second tug was freed up. 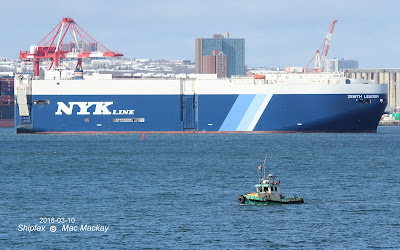 Waiting for a second tug gave the line boat Roseway lots of time to reach Autoport.

The ship belongs to Zodiac Maritime Ltd of London, UK a major operator of all types of shipping, including 14 PCTCs. This one is on charter to NYK Line of Japan. Registered in the UK, it was built in 2007 by Imabari Zosen of Marugame, Japan. At 62,080 grt and 22,602 dwt it is in the mid range of car carriers with a nominal capacity of 6501 CEU (car equivalent units). 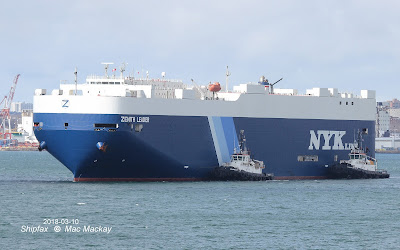 Atlantic Fir arrived to take the bow and with Atlantic Willow on the stern, the course was set for Autoport. 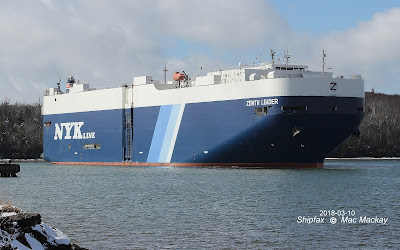 Close to destination tugs swung the ship 180 degrees to come alongside. Most of the world's autocarriers are set up to berth starboard side too.