Refits for two ships are drawing to a close.
Fundy Rose moved this morning from pier 9B to pier 9C, likely to give pier space to test evacuation chutes. 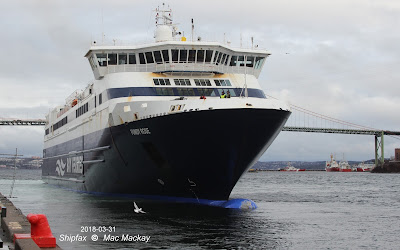 In port since January 25, the ship is due to resume service April 11 as previously reported.

The long awaiting return to service of CCGS Hudson must be very close as the ship sailed from Bedford Institute today, first to Bedford Basin then to sea. 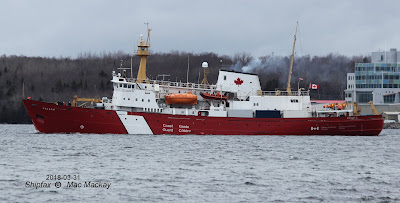 Its return late this afternoon - not to be over dramatic - was majestic. When was the last time a ship with hull sheer and raked masts arrived? 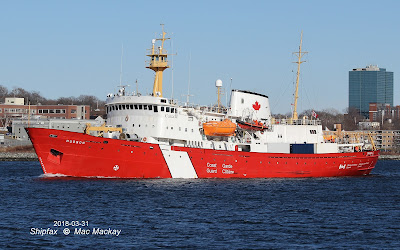 The delay of almost a year in completing the refit has been discussed here before, but given the extended time, I expect the ship will be in great shape to finish out is career.
Built, unbelievably, in 1963 in Saint John, as CSS Hudson it initially worked for the independent Department of Mines and Technical Surveys . It was properly painted white in line with hydrographic survey tradition.Its operation was eventually melded into the Coast Guard, but it retained the white hull until March 1997. 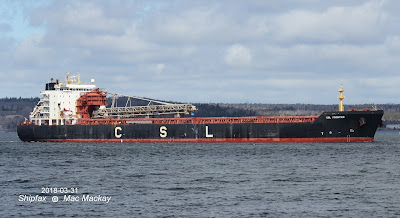 A first time caller in Halifax sailed today. CSL Frontier arrived from Charleston, SC, loaded at National Gypsum and sailed for Savannah, GA.When it was built in only ten months  in 2001 by Hyundai Mipo, as Gypsum Centennial, it was a revolutionary vessel in may ways. It was the first ship with a large common rail fuel injection engine, making it essentially smokeless. Selective shut off of injectors allows engine speeds as slow as 12 rpm. Its patented moving hole self-unloader system means that there are no gates to feed the two conveyors. 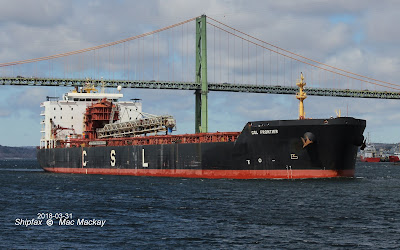 It was built to service for Gypsum Transportation specifically to load at Hantsport, NS, however it did not do so until 2004, preferring to call at US Gypsum's Little Narrows facility in Cape Breton. When US Gypsum (aka Canadian Gypsum) decided to close its Hantsport operation the ship was sent to work in Europe, then in Sierra Leone shuttling iron ore.
In 2015 CSL acquired and renamed the ship. Now it usually carries coal and stone as CSL Frontier.