Catching up with a traffic jam

There was a virtual traffic jam in Halifax this morning with no less than  eleven ships waiting off port for their turn to enter. There were also a couple of delayed departures to deal with. By afternoon things settled down, but there were still three arrivals and at least five departures planned.

The only arrival I caught was Pantionio for Eimskip. My last attempt at a photo of the ship was on February 18 when I was barely able to see it. This time I was lucky as the weather closed in very soon after it tied up at pier 42. 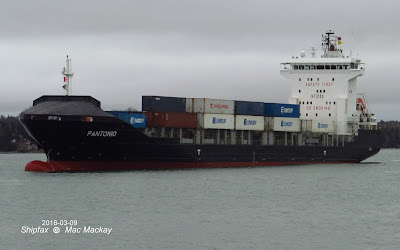 The ship arrived with a very slight list of a degree or two to starboard. It made its way slowly in toward Halterm, turned, then backed into pier 42 without tug assistance. This was possible only because conditions were so calm - a radical change from yesterday, when Shearwater - right across the harbour from Halterm - clocked gusts of 78 kph and sustained winds of 52 kph in mid-afternoon. 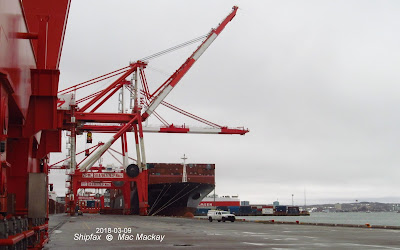 ZIM Ningbo - one of many ships delayed by weather - arrived at pier 41 earlier in the morning, leaving room at pier 42. Tomar (in the background at pier 31) is due to move to Autoport later this afternoon.

Pantonio has replaced Reykjafoss on the Eimskip rotation, as detailed in Shipfax February 18, 2018.
Meanwhile fleet mate Skogafoss has had its charter extended for year.