No not the final score in a game, but the results of some photo taking today.

The Netherlands flag Muntgracht arrived for Spliethoff's on its regular visit. This is an "M' class ship, instead of the usual "F" class. Somewhat larger at 9524 grt, 11,744, it carries three 80 tonne cranes on the starboard side. Built in 2012 by Zhejiang Ouhua in Zhenshan, it appears to have more accommodation sace than other ships of its size. 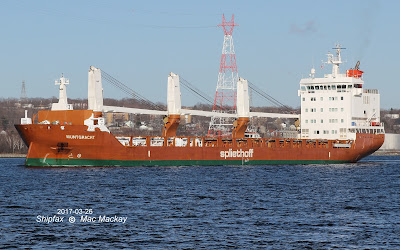 With the St.Lawrence Seaway re-opening at the end of this week, Spliethoff will be resuming their monthly Cleveland-Europe Express service for container and breakbulk. They recently announced the addition of a second ship to the route to meet demand.

Also St.Lawrence related, but not the Seaway itself, CSL's Ferbec arrived flying the Barbados flag. It is in port to re-flag to Canadian and take on a Canadian crew. The ship was flagged out in December 2017 to work overseas, but will soon resume its dedicated run between Havre-St-Pierre, QC and Tracy, QC for Rio Tinto Fer et Titaine. carrying iron and titanium ore. (The ship is too large to fit the St.Lawrence Seaway locks). 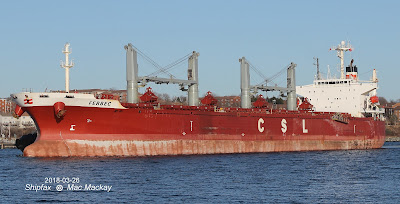 The ship was brought to Canada last year after working as CSL Melbourne since 2015. It was built in 2002 by Nantong Cosco as Orientor, but was soon renamed Orientor 2, a name it carried until acquired by CSL in 2010. The 27,198 grt, 49,502 dwt handymax bulker carries four cranes and grabs for unloading.


The dual fuel Canadian flag tanker Damia Desgagnés remained at anchor today, but will move back to McAsphalt later this evening when the wind dies down to resume unloading. 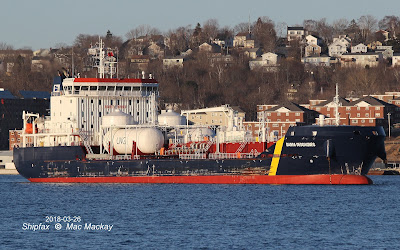 Instead of the usual slop tanks on deck, the ship carries its LNG fuel in large cylinders.
.
Posted by Mac at 8:20 PM