More dollars for research, and some tanker traffic

The Department of Fisheries and Oceans is again hiring outside vessels to conduct research due to the unavailability of ships from their own fleet. 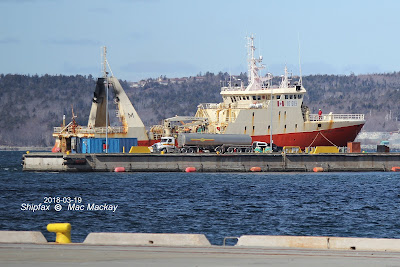 Mersey Venture fueling up at BIO today. The 2337 grt ship was built in 1988 and has been in the northern shrimp fishery.


Mersey Venture, owned by Mersey Seafoods of Liverpool, NS, is the latest hire. It will cost $290,000 to conduct an abbreviated  winter fisheries survey on George's Bank. The annual survey collects important data on fish stocks and usually takes five weeks. However the DFO's aging fisheries research fleet is unable to conduct the work this year due to problem refits.
CCGS Alfred Needler, built in 1982 was to have completed its refit in St.John's February 14, but more steel work was needed so it will not be ready before April 1. Last year when it was unable to complete the survey due to mechanical issues, the work was completed by Teleost (built in 1988). However this year that ship is also in refit, which has been extended from the end of February until at least March 30.

Both DFO ships are up for replacement but delivery dates for the new ships are still somewhat up in the air.  The first of three new ships, Sir John Franklin is fitting out in Victoria, BC after is was "launched" by Seaspan's yard in North Vancouver. It is expected to enter service sometime in 2018, followed by the next two ships in 2019 or even 2020.

Today the coastal tanker Algoscotia took a break from its routine of shuttle trips from Lévis, QC to Imperial Oil in Dartmouth. The ship moved to pier 26 - likely for some repair work. 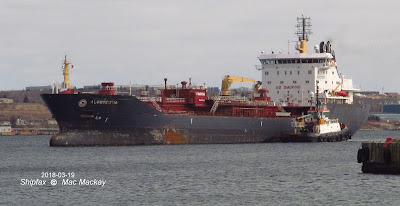 The Algoscotia has been working through the winter and certainly shows signs of wear and tear on the hull.

Based in Come-by-Chance, NL. the 2985 grt, 3569 dwt  tanker North Atlantic Kairos arrived at pier 9 today with cargo for Wilson's Fuels. Built in 2008 in Tuzla, Turkey, to the same design as Algoma Dartmouth, it is primarily a bunkering tanker, but can also carry out coastal voyages 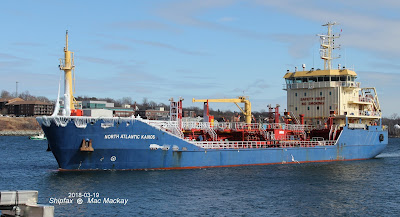 As North Atlantic Kairos approaches pier 9, the tug Roseway in the background, is towing a containment boom that will be placed around the ship while it discharges its cargo. An underground pipeline connects pier 9 to Wilson's tanks on Barrington Street.

Built in 2008 as CT Wicklow is was acquired by North Atlantic Refining Ltd in 2016 and arrived in Halifax July 9, 2016 for fitting out and renaming. It returned to Halifax in August of that year with a cargo for Wilson's.