Many heavy lift ships have called in Halifax, some multiple times, however to my knowledge this is only the second visit of the Jumbo Shipping vessel Stellaprima. It was last here in the year 2000 when it picked up a cargo of locomotives destined for the UK. 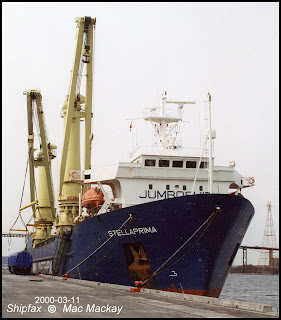 The unusual aspect of the visits is that they have occurred on virtually the same dates. March 10 to 14 in the case of the first visit and today for the second. It is also unusual that the same ship would make calls so many years apart since ship lifespans are relatively short. 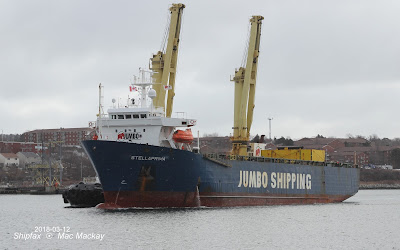 However heavy lift ships are a rare breed and very expensive to build, so they must last much longer in order to justify the cost. In fact Stellaprima was built in 1992, which would put it at near the end of its useful life for a typical merchant ship-particularly under one owner. 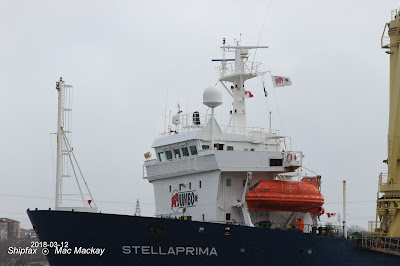 However with the usual meticulous care that the Dutch usually provide for their ships, it appears still to be in top condition. There are other factors that make the ship of interest and that is the unusual cranes. One 250 tonne and one 400 tonne capacity, that can work together for a maximum 650 tonne lift. The ship has a large single hold and therefore can carry unusually large or heavy cargoes. The ship is fitted with a special ballast system that compensates for the weight that the cranes can carry. It also has pontoons that can be floated overside as counterweights (these are the yellow boxes perched on the ship's after deck.) 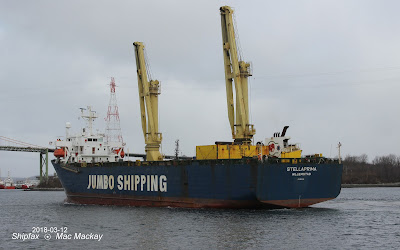 The reason for Stellaprima's call in Halifax today is to deliver a special service vessel for Dominion Diving Ltd. Called a Multicat, it is a multi-purpose workboat/cargo/tug named Dominion Warrior - see Tugfax for more information on this unusual boat. Stellaprima loaded the craft in Gibraltar and sailed directly to Halifax.

By coincidence, as Stellaprima was still securing at pier 9C another Dutch ship departed Fairview Cove outbound. Spiegelgracht operates for Spleithoff's, the parent company of a competing Dutch heavy lift operator, Big Lift Shipping. It is beyond coincidence that "spiegel' means star, as does "stella". 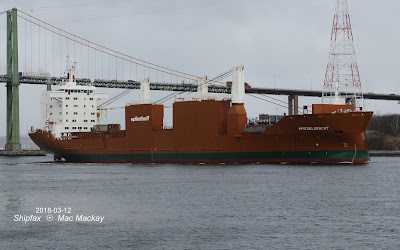