With light snow on the ground and a few snow showers in the air, perhaps it was good to be reminded that spring is on the way.

One sure sign is the opening of Asian Gypsy Moth season. As of March 15, all ships entering Canadian waters that have been in the far east must provide a declaration that the ship is clear of the pests that threaten North American forests. Ships that have visited China north of Shanghai, Japan, Korea and the far east of Russia may be carrying egg masses of the invasive insect.

If they do not have a certificate they  must undergo an inspection by the Canadian Food Inspection Agency. It takes a few hours to do this, and it is usually done at Halifax, Sydney or the Strait of Canso, before the ships get near any forested areas.

The regulations make no exceptions for ships such as autocarriers that are going no deeper into Canada than Halifax.Such is the case for Miraculous Ace and the reason that the rare sight of an autocarrier anchored in Bedford Basin. 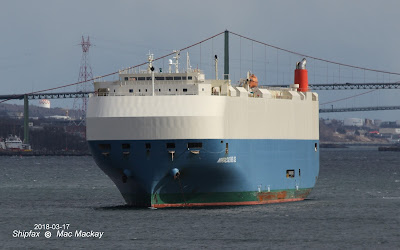 The ship will remain anchored in the Basin until Monday.

At pier 27 the Radcliffe R. Latimer was doing some hold cleaning after winter layup. They had swung the self-unloading boom out over the dock, and with an elephant's trunk extension were preparing to unload sweepings into trucks.

The ship is preparing to sail tomorrow, which will give it time to pick up cargo en route to the opening of the St.Lawrence Seaway at the end of the month. 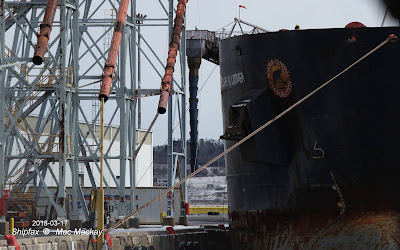