Waiting it out - again

The third major storm to sweep through the area in as many weeks has once again disrupted arrivals and sailings. As today brightened up from last night's snow and rain, there was still very high wind and breaking waves in the harbour. Conditions outside are no doubt much worse. 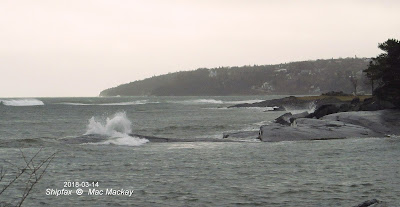 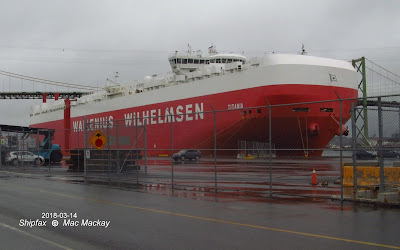 At pier 27  BBC Ganges in from Baie-Comeau for a brief stopover - and no cargo work - is stuck in port until conditions improve outside. 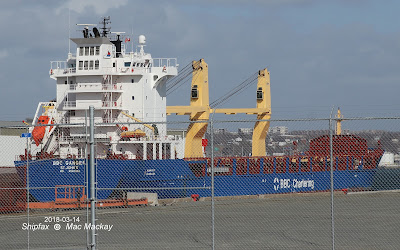 At the adjacent pier 31 Hollandia had completed unloading nickel from Cuba for Nirint, and is waiting its turn to leave port. 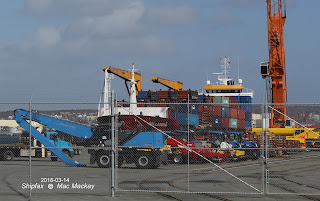 On February 19 in Oranjestad, Aruba, while hoisting a mobile truck crane from its hold a sling parted and the unit was dropped on the tween deck and heavily damaged. Apparently the ship incurred minimal damage, but the truck crane was in a sorry state.

Once again at anchor in the lower harbour Nolhanava is repeating its performance of the past few weeks. On arrival from its St-Pierre et Miquelon run, its normal berth is occupied by Oceanex Sanderling and it will await its time either at anchor or at pier 9B. 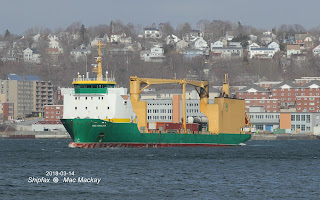 The ship was registered in Canada September 1, 2017.  The Canadian registration show its name as Nolhan Ava and that is how it will be shown here. For some reason the ship's registration is still shown in Transport Canada's online listings, but is also shown as closed, and the ship still carries Briidgetown (Barbados) on its stern. I understood that it was moved to Canadian flag to allow it to call in Newfoundland as well as St-Pierre on its weekly trips, but whether this has happened yet I am not sure. I believe it does carry a Canadian crew. 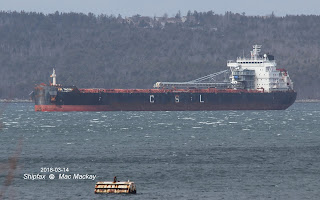 In Bedford Basin CSL Tacoma is waiting out the weather with its cargo of gypsum bound for the US. 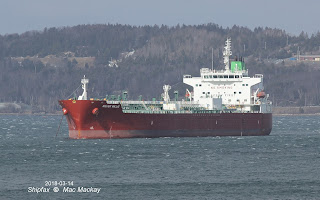 When conditions improve, it will dock at Imperial Oil. Interestingly its last port was Vondeling, Netherlands (within the port of Rotterdam). It is the first foreign tanker at Imperial Oil in several weeks - ever since Algoscotia began shuttling product from Lévis, QC. Prior to that Imperial was getting refined product from the US Gulf.

Harbour ferries were battling it out against wind and some swell as they maintained their regular schedules. 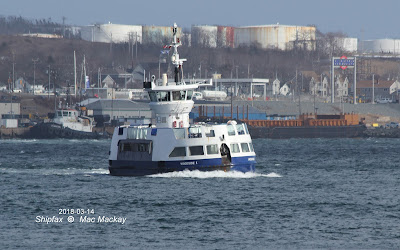 Woodside I was doing some rolling as it lined up for arrival in Halifax from Woodside. 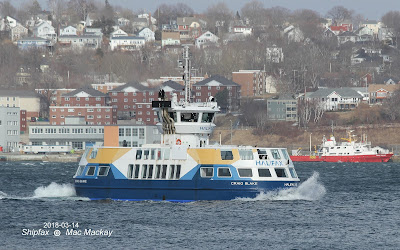 Craig Blake was doing some splashing on its way to Halifax.
And at Fairview Cove, YM Epress moved under the big cranes to work cargo after Dalian Express had finished. Dalian Express then moved to the east end of the pier to await an improvement in sailing conditions.

Wind driven salt spray in the Narrows almost blots out the Dartmouth shore, despite bright sunshine.