A long time fixture in Halifax harbour will be seen no more. Canadian Maritime Engineering (CME) is breaking up Haligonian III at their shipyard in Sambro Head, NS. 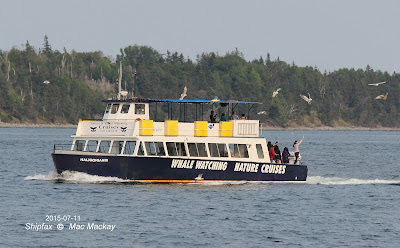 In later years, the boat had a steady following of gulls.


As one might suspect from its name this is the third "Haligonian" tour boat in the harbour. Haligonian and Haligonian II were a pair of wooden vessels and the only harbour tour boats in the port. Remarkably Haligonian II, built in 1968, is still running, but in Percé, QC.  It was extensively rebuilt in 1997. 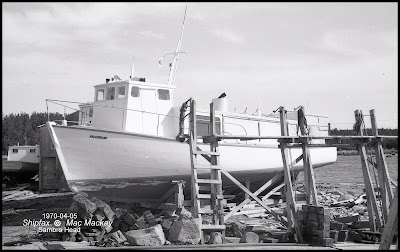 Haligonian built in 1964 was the first harbour tour boat to carry the name.

The term "Haligonian" applies to a resident of Halifax and seems to have been coined in its namesake town in West Yorkshire and brought to Nova Scotia in 1749. The new settlement of Halifax was named for George Montagu-Dunk, 2nd Earl of Halifax, President of the British Board of Trade at the time. I guess we should be happy we are not known as "Dunkers".

In 1948 a T-2 type tanker, built in 1943 as Fort Donelson was quite delightfully re-named Haligonian Lad by Acadia Overseas Freighters, managed by I.H.Mathers of Halifax, but it only carried the name for a year. The moniker has otherwise seldom appeared on ships or boats. 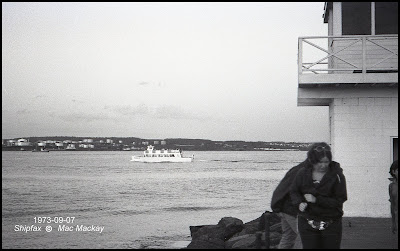 Haligonian III was originally painted all white.
It is seen here passing the old Halterm breakwater, that had a lighthouse at the seaward end.

Haligonian III was built by Hike Metal Products Ltd in Wheatley, ON in 1972 to a standard design developed by the yard in the early 1960s, and repeated several times for various ports. When it arrived in Halifax it added a much needed degree of comfort to harbour tours, thanks to its stability.

The boat has had a relatively uneventful life, with only one serious accident. On September 15, 1990 it was in collision with the small container ship Mathilde (bound for Cuba) off Halterm on a stormy day. The container ship was having a hard time getting off the pier due to the wind, but when it finally did get away, Haligonian III was in the way and the two vessels made contact. One passenger was injured - but there was minimal damage to the boat. I almost witnessed this incident, but did hear it unfold on VHF radio, and was able to get a photo shortly afterward. 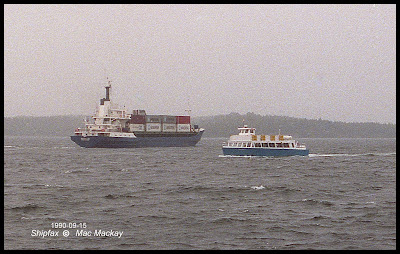 After the collision, Halgonian III returned to base. It carried the light blue hull colour until 1992.
No wonder the ship had a visibility issues, with a an obstructing deck load and a truck on top.


Once more harbour tour boats began arriving in Halifax, the traditional route from downtown to the Northwest Arm and back was transferred to Harbour Queen I and Haligonian III was able to do extended tours out towards the harbour mouth for nature watching and fishing trips. Whale watching had become popular, and although Halifax is not noted for large numbers of whales, it was promoted with a large banner on the boat's side and there were numerous whale sightings. 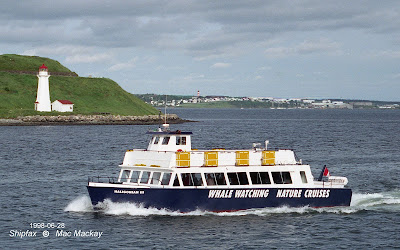 An awning was added to the boats upper deck about the year 2000.

At the end of the 2015 season Haligonian III was laid up for the winter at Mill Cove, Bedford Basin and offered for sale. It then moved to Sambro Head where it was drydocked by CME. It seems likely that this was more for survey than for repairs, as the boat was then moved to long term layup in Sambro harbour. 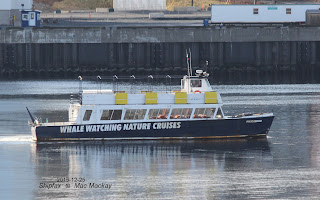 On Christmas Day 2015 the boat made a painfully slow move on one engine to layup in Mill Cove.

Scrapping the boat seems to have started recently, and at the rate it is going, will likely be completed in the next few days or weeks.

Haligonian III has been replaced by Kawartha Spirit a vessel of the same basic design, also built by Hike Metal Products, but in 1964. Even though nearly a decade older than its predecessor, it has spent all those years in fresh water, and so was in excellent condition when purchased in 2016. I hope its oddly inappropriate name can be changed to reflect its new home. 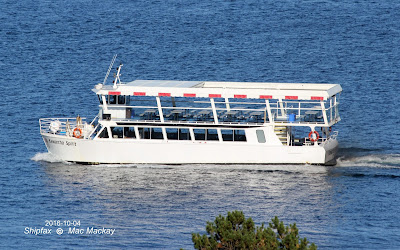