Very high winds coupled with high tides resulted in delays for arrivals, departures and moves in the harbour.
The container ship APL Phoenix was due at the pilot station at 0800 but instead went to anchor off Chebucto Head until conditions become safe for pilot boarding and docking. 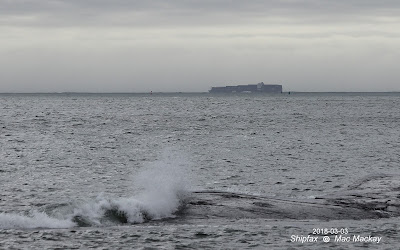 Although about 7 miles from my vantage point, the lens brings the ship closer and flattens out the seas that prevent the ship from entering port.


The 109,712 grt, 115,075 dwt ship with a capacity of 9200 TEU is on the Columbus JAX service. It was built in 2013 by Daewoo Shipbuilding + Marine Engineering Ltd in Okpo for NOL (Neptune Orient Line) parent of APL (American President Line) which has since been taken over by CMA CGM.

The ship was not the only Daewoo Okpo product to be seen today.

Built in 2000 by the same yard, the ferry Fundy Rose is tied up at pier 9B for a refit.Earlier in the week the ship was turned end for end at the pier to allow work from the shore on extending the ship's fenders and other work. This morning workers had the stern ramp down.  And surprise - a personnel door adjacent to the ramp is still surmounted by a name plate identifying the ship in its original name. 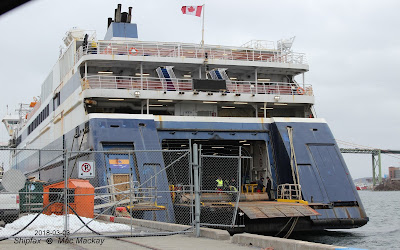 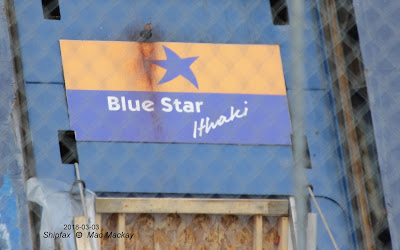 Although launched as Superferry Ithaki it was renamed Blue Star Ithaki before entering service for Blue Star Ferries, SA of Athens. That is the name that still appears on the plate - an interesting artifact of its previous life.

In October 2014 the ship made its last run between Tinos/Syros/Mykonos and arrived in Piraeus to be handed over the (Federal) Minister of Transport. It was renamed Canada 2014 for its delivery trip to Canada. It arrived in Saint John, NB, December 2, 2014 but was sent to Halifax for refit, arriving December 5. That refit at pier 9A took until July 13, 2015 when it sailed for Saint John, entering service between Saint John and Digby, NS July 18, 2015, operated by Bay Ferries Ltd. Its current refit was scheduled for completion by March 20, but that has been extended possibly to March 31.