March has lived up to its reputation as a windy month, and going into the last week, today was no exception.

CMA CGM Medea arrived for Halterm this afternoon. Normally ships on the Columbus JAX service arrive on Saturday, so weather was no doubt a factor. 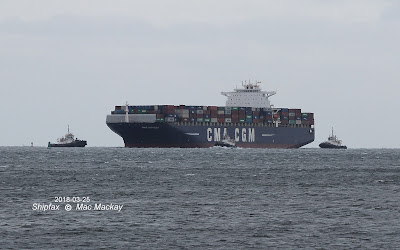 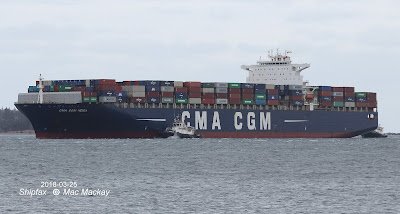 Note the deck is loaded only 4 boxes high - no doubt a precaution against expected conditions in the winter North Atlantic.

And for Cerescrp at Fairview Cove Berlin Bridge arrived on AL6 service for THE Alliance. 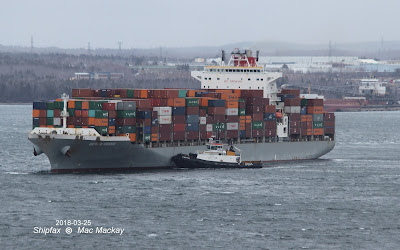 Deck stacked six boxes high, the ship has much lower freeboard than the CMA CGM ship shown above. Somewhat suprosiginly for a North Atlantic winter crossing.
Bulker Atlantic Huron is loading at National Gypsum in the background. It is due to sail tonight. (It left winter layup in Montreal on March 17).

A regular caller the 4526 TEU ship is owned by Seaspan International and is on long term charter to K-Line.

The coastal tanker Damia Desgagnés made another appearance to day, its second this year, for delivery to the McAsphalt dock in Eastern Passage. When the winds picked up however it went out to anchor. 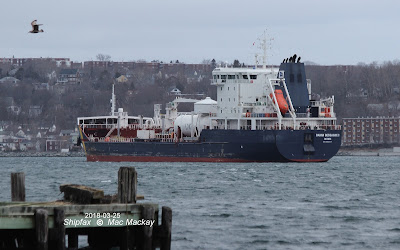 The first Canadian dual fuel ship, it can use LNG or Marine Diesel/Heavy Fuel Oil. Less than a year old, it arrived  in Canada from its Turkish builders last May. It will be joined shortly by sister tanker Mia Desgagnés which sailed from Rotterdam March 21 and is due in Montreal April 2.

Also in port the small tanker North Atlantic Kairos is back with another cargo (believed to be furnace oil ) for Wilson Fuels. It is due to sail tomorrow.