HMCS Toronto put to sea this morning for a day of exercises. With a storm brewing in from the sou'east (again) the ship was back in port by evening. 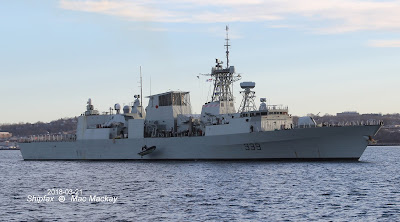 HMCS Toronto recovers its RHIB. It had returned the navy pilot back to the Dockyard.

The biggest thing that happened in Halifax harbour today was the Malta flag bulk carrier Proti at number one anchorage for Asian Gypsy Moth (AGM) inspection en route from Rotterdam (Maasvlakte) to Sept-Iles for a cargo of iron ore. 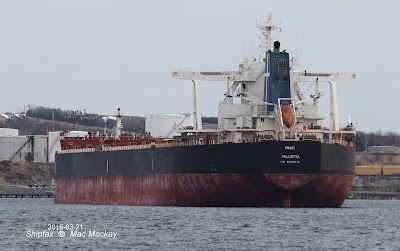 Built in 2015 by Japan Marine United, Ariake, as Indomitable, the 93,297 grt, 182,476 dwt ship was sold and renamed in 2016. (Japan United was formed in 2013 by merging Universal Shipbuilding and Ishikawajima - Harima Heavy Industries. It is now the second largest shipbuilder in Japan.)

Inspection completed, the pilot boat heads out to the Poti.

The ship spent no longer in port than it absolutely had to, and was gone as soon as the inspection was completed.


Another arrival for AGM inspection was the tanker Silver Express. A Mid-Range tanker of 26,900 grt, 47,701 dwt, it was built by Onomichi Zosen, in Onomichi Japan in 2009. It also used stay in port to take on bunkers. 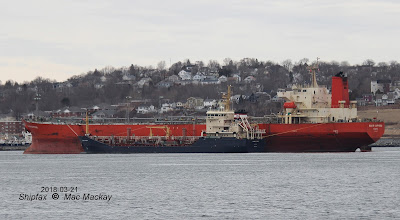 Algoma Dartmouth has taken up position alongside the ship for bunkering.

The ship arrived from New Haven CT, and does not show a destination, but is likely headed for Newfoundland.

Owned by the Russian company Sovcomflot, it is nevertheless registered in Liberia and managed from Dubai by SCF Management Services (a SovComFlot subsidiary). It was last in Halifax in Septmber 2016 when it docked at Imperial Oil.


There has been a bit of an unveiling at the Bedford Institute, as the hoarding around the wheelhouse and bow of CCGS Hudson has been removed. Bridge window replacement was apparently part of the refit work that the ship had yet to complete when it returned from Hamilton, ON last fall. The ship is looking pretty good, so it seems possible that it will make the revised completion date of April. 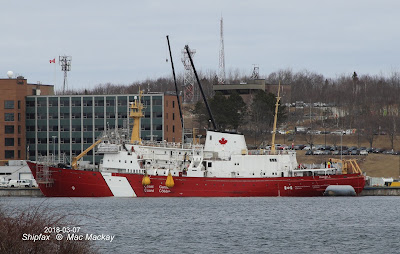 On March 7, work was still underway from staging around the bridge and bow.
Also a number of fenders had been rigged.
The yellow bags are in fact water weight used to test the ship's davits. 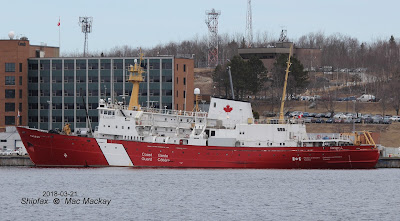 Today all that was cleared away and the ship is returning to normal appearance.

Also in at the BIO is the CCGS Sir Wilfred Grenfell after assisting the distressed vessel Nordika Desagagnés off Louisbourg. [see Tugfax]. 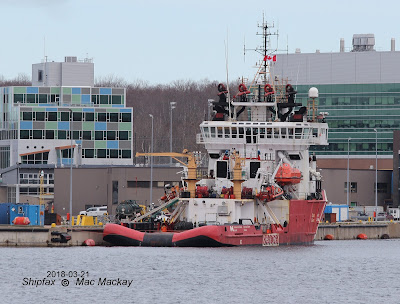 The ship was built originally as an anchor handling tug supplier and although converted for Search + Rescue, it still has its stern roller and winch house.