Most ships these days are not unique, but members of a class of ships built to the same specifications, sometimes in different shipyards.  K-Line, one of the world's largest shipping companies (Kawasaki Kisen Kaisha) with around 525 ships in all categories, owns many classes of ships with several ships in each class.

K-Line operates the AL6 service into Halifax for THE Alliance with with five ships all of the same class. Brotonne Bridge, 46,444 grt, 58,200dwt, 4526 TEU is the "name ship" of the class and it was in port yesterday.

Today its classmate of the same specifications Brevik Bridge made its call. All five of the ships were built by Samsung Shipbuilding + Heavy Industries Ltd in Koje, South Korea.

Although operating for K-Line the ships are owned by Seaspan International, part of the Washington Group on a 12 year charter with two 3 year options. No announcement has been yet about how chartered ships will be integrated into the new Ocean Network Express (ONE) merger of K-Line, MOL and NYK container services. Effective April 1, ONE will take over all the container business of the three lines, including K-Line's 60 container ships. Some rationalization may be expected, but long term charters will still be needed to meet commitments.

Meanwhile at the other end of the harbour K-Line's Columbia Highway was tied up at Autoport. (It did not appear to be unloading today.) 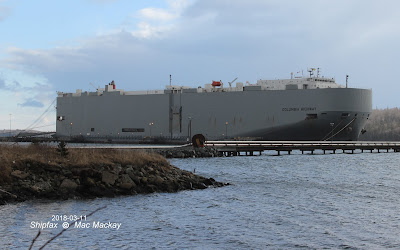 Ramp down, but not unloading at Autoport.
(McAsphalt dock in the foreground with its insulated pipeline, and an oil boom reel.)


Patiently waiting in the offshore anchorage since yesterday its classmate Adriatic Highway will come in to Autoport tomorrow when Columbia Highway sails. 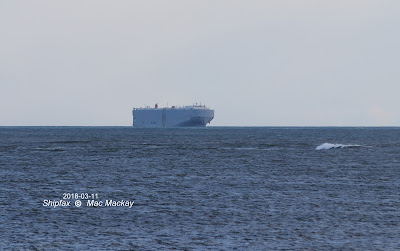 In the eastern anchorages, 4 miles off Chebucto Head, Adriatic Highway is about 4.8 miles from my vantage point.

Built in the same yard in the same year, and delivered 2008-08-08, it has slightly different tonnages of   58,990 grt, 18,868 dwt, but in other respects is essentially identical. with the same capacity of 6237 cars. It is owned directly by K-Line and managed by Taiyo Nippon Kisen Ltd  under the Japanese flag.

Despite snow showers - at times blinding- weather has improved dramatically, allowing much of last weeks port backlog to be cleared, with no other ships waiting. 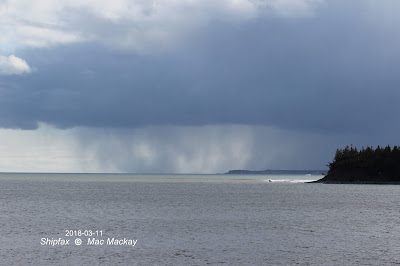 A snow shower moves across Chebucto Head, as seen from the shore line at Eastern Passage.
Posted by Mac at 8:51 PM