Over the years Melfi Marine has had countless ships on charter - some long term and some short, but ever increasing in size. In the past year the ships have inched up again to break the 2,000 TEU mark.
One of those is Jona now on its third trip for the line.

Melfi operates from Genoa, Barcelona, Valencia, Lisbon, Halifax to Mariel, Cuba and back to Genoa with four ships, making a call in Halifax every two weeks. 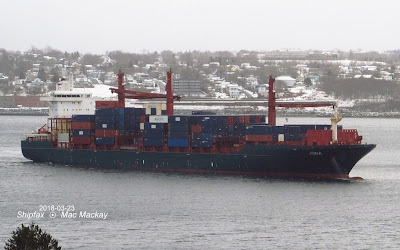 Jona moves from over night anchorage to pier 41 Halterm this morning.

The ship was built as Rio Stora and in 2010 was renamed CMA CGM Togo, reverting to Rio Stora again in 2012 and was renamed Jona in 2013. It flies the Liberian flag for German owners, managed by MPC Munchmeyer Petersen Steamship GmbH + Co.

Having a "Jonah" aboard is considered to be a very bad omen for a ship - but perhaps omitting the "h" in this case eliminates that concern.