The port began to return to normal late yesterday and into today. As the seas flattened out a bit and the wind tailed off, ships were able to arrive and depart safely.

APL Phoenix getting underway this morning, with ZIM Alabama also at anchor in the background. The Maugher's Beach lighthouse did indeed suffer damage and its light signal is now considered "unreliable".

Ships that had been trapped in the port were able to sail, starting with Toscana (which was not in for repairs after all, but was waiting out the weather since last Thursday) and Nolhanava (was due to sail Friday) both  left yesterday, and Aniara was able to move from pier 31 to Autoport, a move that had been intended for Friday).

Aniara was then able to get away this morning. 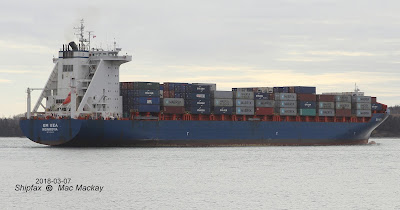 YM  Modesty and Altantic Star departed from Ceres in Fairview Cove. They had been scheduled to leave Saturday and Sunday respectively. 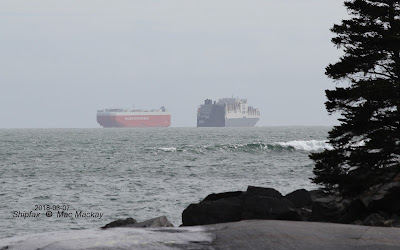 Among arrivals today APL Phoenix got in to Halterm, but left Zim Alabama waiting at anchor outside until tomorrow. Zim Ningbo is also at sea waiting for tomorrow - both several days behind schedule. 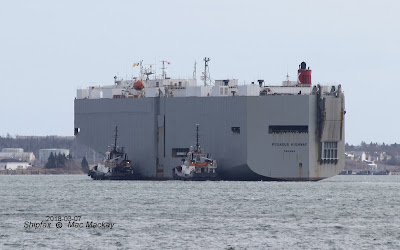 The long awaited Pegasus Highway also finally made it in today (was due March 1) and got underway again this afternoon. An interesting ship, it is rather old as autocarriers go, built in 1994 by Oshima Shipbuilding in Oshima, Japan, it is also relatively small by today's standards, at 49,012 grt and 15,553 dwt. On departure it gave its next port as Cristobal, Panama. It is unusual that it would have no USA stops. 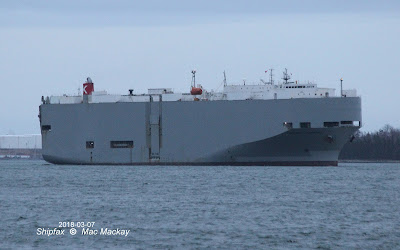 Also making it into port today was the Irving Oil tanker East Coast and the Newfoundland connector Oceanex Sanderling. 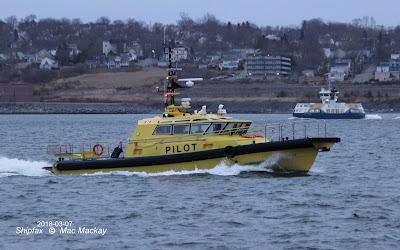 The pilot boat Scotia Pilot was kept busy today, running in and out with pilots. Some pilots disembarked early and the boat, with pilot aboard, then escorted the ships out to the pilot station area.

This was a busy day in the port as a result, but there have been several other delayed arrivals due to the weather to the south. The regular Melfi and Tropical ships, usually here on Monday or Tuesday have extended ETAs. Melfi's Jona is scheduled for tomorrow (but not confirmed). Tropical's Bomar Rebecca has been postponed for a week to March 12, and all subsequent ships are advanced a week.


Numerous other schedules have also been thrown in disarray by weather both in Europe and the North American eastern seaboard.