It was an unusually quiet day in Halifax for a Saturday. The usual Maersk ship, this week it was the Maersk Penang, arrived and sailed without fanfare. The ferry Fundy Rose sailed for sea trials and will return tonight.
At Autoport Don Carlos finished cargo work (after a day at pier 31 also) and sailed.

The tug Mister Joe arrived from Saint John (via way ports) with the dump scow  S11 en route to Point Tupper. It will wait out some more weather for a few days before continuing its trip. And at the Bedford Institute Imperial Dartmouth bunkered CCGS Hudson - another sign that the refit must be nearing completion. 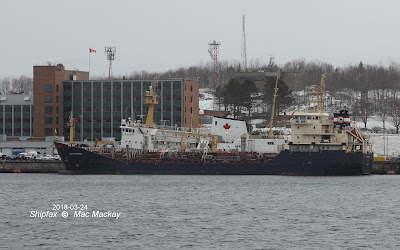 Meanwhile off the end of Pier B (berth 31) the scowl that has been working all this week was still hard at it. (A close examination will show three men operating the drill.) 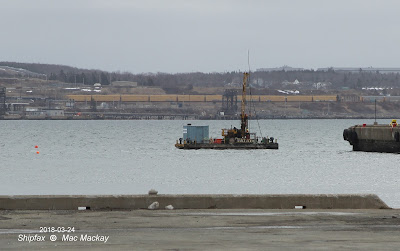 This work is to take core samples from the harbour bottom, usually in advance of dredging or major marine construction. Although no plans have been announced there continues to be speculation that the Port's master plan does not involve moving the Halterm container pier after all, but to expand it dramatically by filling the cambers between some of the deep water piers.
(In the background of the photo above, the yellow objects are rail cars (car racks) waiting their turn at Autoport. They are now highly visible because little trace remains of the Imperial Oil refinery, which has been scrapped and demolished to grade level.