Pilotage operations remain suspended for the third day as high winds and seas continue to blast the port. Despite sun and above zero C temperatures today and relative calm inside the harbour it continues to be very windy and unsafe to board or disembark pilots at the pilot station.

Seas crash over the Maugher's Beach spit.
There may be damage to the lighthouse since it appears to have a slight tilt.
Even inside the harbour high gusty winds halted the movement of big ships. The master and pilot of Aniara agreed that it was too windy for the autocarrier to move from pier 31 to Autoport. The ship has been in port since Friday.

APL Phoenix continues to hold off Halifax. It did make an attempt to board a pilot this morning the but the operation was scrubbed.

The autocarrier, Pegasus Highway, has had its arrival put off again. It was originally due March 1, but because of the potential backlog at Autoport it remains at sea with no firm ETA. The ship was hove too off Cape Breton for the weekend, but today was it was noted closer to Halifax.There is concern ashore that the ship has cargo damage, but my sources are close lipped as usual. 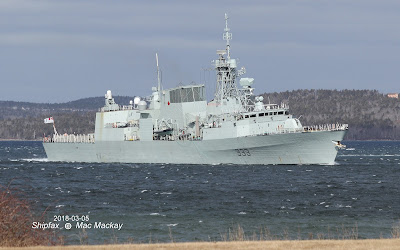 HMCS Toronto completes a turn off Africville Park. Winds in the Basin averaged 24 knots and with gusts over 30 knots there were lots of white caps.

There was small craft activity in the harbour today (see Tugfax) but the only large ship movement took place in the blustery Bedford Basin where HMCS Toronto was doing some high speed turns. Hope the crockery was well stowed.