Busy at Pier 9C, and elsewhere

Pier 9C, the recently developed area of Richmond Terminals has been very busy recently, certainly justifying the investment the port made in expanding the area nearest the A. Murray MacKay bridge.

Today, in addition to the suppliers Atlantic Tern and Burin Sea, regular users of the area, there is a large load of drill pipe and riser assembling for BP's drilling program this summer. The finishing touches are also being made on the new MI Swaco drilling lubricant facility at the extreme north end of the pier.

The surprise visitor at the pier is the autocarrier Toscana which seems to be in for repairs, since its ramps are in the up position and no cargo work appears to be going on. 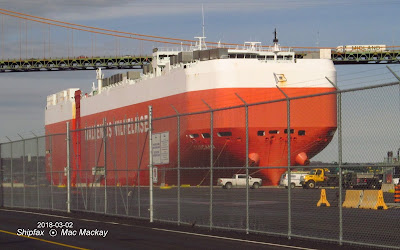 It is unusual to see an autocarrier in the Narrows, and such a large ship at Pier 9C.

The dock area is covered with drill pipe (rusty coloured) and riser assembly (white) that BP will be using for their exploration well. There would be little room for the ship to lower is cargo ramps - especially the 300 tonne capacity stern ramp.

Toscana is not super large by today's standards, but it does measure an impressive 61,328 grt, 22,250 dwt and has a capacity of 6,354 CEU. It was built by Mitsubishi Heavy Industries, Nagasaki in 2009. It is a Wilhelmsen ship operating in the Wallenius Wilhelmsen fleet that numbers about sixty auto carriers.

Speaking of autocarriers, another Wallenius Wilhelmsen ship was tied up at the other end of the port at pier 31 at the south end Ocean Terminals.This one however is a member of the Wallenius partner in the line. Aniara although essentially the same type of ship is quite a bit bigger at 71,673 grt,  30,087 dwt, with a capacity of 7,600 CEU (car equivalent units). This largely achieved by length- it is 231.6m long versus 199.9 for Toscana. Aniara was built in 2008 by Daewoo Shipbuilding and Heavy Engineering in Okpo. The ship will likely move to Autoport, but no time has been given due to weather. Pier 31 is a much better place to be during very high winds. 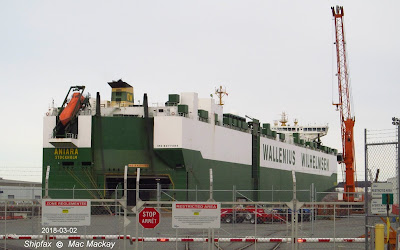 In the the new fenced off era it seems that ships have become more background than foreground.

At nearby Halterm both Oceanex Sanderling and Nolhanava were loading for their coastal trips. However Nolhanava has opted to go to anchor tonight in view of the winds predicted for the next 24 hours.

Fairview Cove had two ships today also, Glen Canyon Bridge which arrived this morning and YM Modesty arriving late this afternoon.
YM Modesty is a 6258 TEU container ship built in 2013 by Koyo Dockyard in Japan. It measures 71,821 grt and 72,730 dwt.

Just to give an idea of how blustery it is already, the launch / tug Captain Jim was making a lot of spray on its way back from a chore in Bedford Basin. 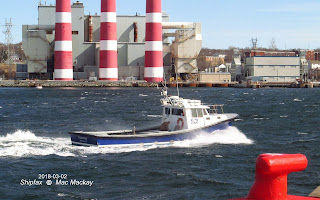 The boat was built in 1989 along fishing boat lines, but is a jack of all trades, doing small towing, working as a launch and crew/supply boat in the harbour for owners RMI Marine.