The Canadian Coast Guard is scrambling to meet its various commitments for aids to navigation and search and rescue. With the opening of the lobster season in southwestern Nova Scotia there have been complaints that the Coast Guard lifeboats in the area were not ready. CCGC Clarke's Harbour returned to Cape Sable Island after refit but had at least two engine breakdowns en route. It is now on station, however CCGC Courtenay Bay from Saint John is also at Clarke's Harbour, leading me to wonder if Clarke's Harbour is in fact serviceable. 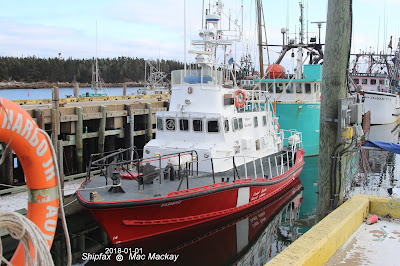 Arun class lifeboats are being replaced.


One of the Halifax based patrol boats, CCGS Corporal McLaren MMV is out of service indefinitely after it partially sank in Sambro during a refit. 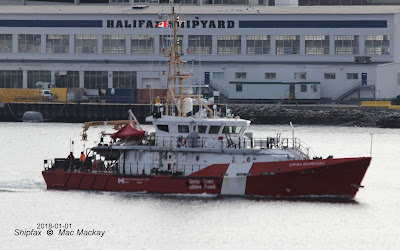 Its counter part CCGS G.Peddle S.C. is supposed to go for its refit in January, but that may have to be delayed. These vessels play an important part in enforcement and SAR during the busy winter lobster season. 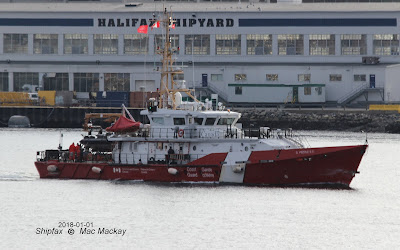 The several boats of this class based in Quebec and Ontario are going into winter layup, and so far there does not appear to be any plan to bring one to this region to fill in.

Other lifeboats, that are due for replacement, will remain in service this winter from what I can see as the two most recent deliveries have been shipped to the west coast. They took a ride on Atlantic Raven from Saint John as it makes its trip to take up emergency towing duties on the Pacific coast. 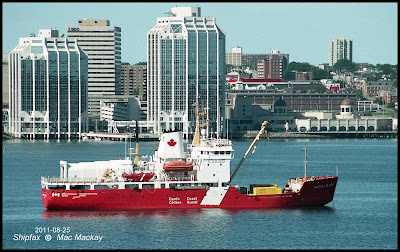 Quebec City based CCGS Marha L. Black is in Hamilton, ON for refit.

With winter fast approaching here and already arrived further north and west, the Quebec City base is short of vessels too. CCGS Martha L.Black is in refit at Heddle Marine in Hamilton, ON and is supposed to return to Quebec before the Seaway closes for the winter. In the meantime the CCGS Sir William Alexander has been sent from Halifax to do winter buoy removal out of Quebec City. This has delayed its life extension program which was supposed to start in November. 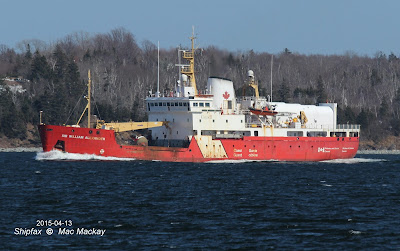 
CCGS Griffon has completed a refit in Méchins,QC, but also appears to be working in the Quebec area before returning to the Lakes where it is needed for winter work.

The Atlantic region is already short of vessels with CCGS Edward Cornwallis in life extension refit in St.John's until next spring and CCGS Earl Grey at the BIO base until the end of the year. CCGS Sir Wilfred Grenfell has been sent from Newfoundland to assist with search and rescue for the opening of the lobster season. CCGS Cape Roger, also from Newfoundland is also in the southwest Nova Scotia area.

All this is not to mention icebreaking which is another area of stress for the CCG. Both CCGS Terry Fox and CCGS Louis St-Laurent will be out of service until at least the end of January. The Quebec base will also be short two icebreakers at least this winter. The newly acquired icebreaker Captain Molly Kool (ex Vidar Viking) may be able take up some of the slack, but it is not a proven entity yet. It should be out of refit in December, but its two sister ships, Balder Viking and Tor Viking, will not be ready for work until next summer.

Then there is research conducted by the Department of Fisheries and Oceans, which has been seriously hampered by the lack of serviceable ships. The venerable CCGS Hudson is the only large research vessel operating out of Halifax nowadays, and it is a sink hole for repair dollars.