The tanker Qikiqtaaluk W. arrived today at the outer anchorages, but is so far not scheduled to enter port. According to most sources it is en route from Montreal to Savannah. 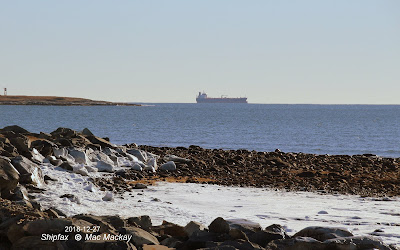 With Devil's Island to the left Qikiqtaaluk W. rides high at anchor. Frozen spray on the shoreline hints at the frigid air temperature.


The ship was built as Icdas-11 in 2011 and is an ice class vessel measuring 13,097 grt, 19,984 dwt, fitted with twelve tanks and fourteen manifolds. One of two sister ships acquired by Coastal Shipping Ltd this year, it is named for the eastern portion of the Nunavut region. (The former Icdas-09 named for Nunavut's western region is now Kitikmeot W. It is currently loading in Come-by-Chance, NL).

After supplying arctic settlements during the northern navigation season, it went off to Europe, and was spotted in Ijmuiden November 8. It then had a stint in drydock and Blohm+Voss, Hamburg from November 12 for prop and shaft work. It was then spotted in Emden November 23.
On December 16 it was upbound in the St.Lawrence Seaway for Oshawa, arriving December 18. It sailed again the next day and was out of the Seaway again December 20, sailing directly for Halifax.

At some point it took up its winter bareboat charter and was reflagged to the Marshal Islands, possibly while in Europe.