Business seems to be booming at Halterm these days despite the departure of Maersk's MMX (possibly temporarily.) Today saw the arrival of APL Mexico City another of the 9200 TEU class of ships operating for Columbus JAX service (and four days late). It was able to squeeze in to pier 41 to use the big cranes while Asian Sun was at berth 42 for Tropical Shipping. Tomorrow will be an even busier day with ZIM and Eimskip vying for space with Oceanex and St-Pierre et Miquelon.

The dredging contract for the southward pier extension has been awarded to McNally Construction, and the company has begun to mobilize - setting up a construction office at pier 23 and delivering two dump scows to pier 9. 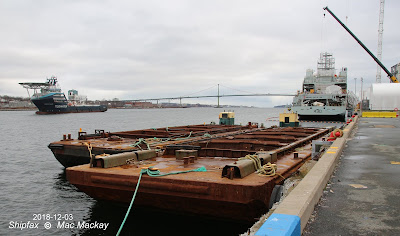 A pair of McNally dump scows delivered to pier 9 by the tug Mister Joe on Monday await arrival of the dredge and workboats in tow late tonight.

The current pier 42 extension is undergoing some surface patching while Tropical's reefer containers are lined up for cleaning before going back south.
The new extension will be at least this long again but of entirely different construction.

Recent startling statistics show that the relative boom in the US economy, coupled with the opening of the enlarged Panama Canal has resulted in the average size of ships on the Asia to North America Gulf of Mexico and East Coast, including Canada, increasing substantially to exceed the average  size of ship in the Asia-Europe  trade.
Shipowners continue to build giant ships for the Asia-Europe trade, pushing slightly smaller ships to the Asia- North America Gulf and East Coast.
There are currently 33 ships of more than 20,000 TEU trading between Asia and Europe, 46 between 18 and 20,000 TEU and 9 from 16-18,000 TEU. It is expected that with the delivery of many more large ships this year some of the 40 ships in the 14-16,000 TEU range and many of the 25 ships in the 12-14,000 range will be shifted from Asia-Europe.

Halterm, if it can berth two of the larger ships of up to 14,000 TEU, and work them with enough cranes  to get them in and out quickly, may be able to keep pace with US ports.