Faced with a growing demand for fuel deliveries Algoma has been chartering in foreign flag tankers this year to work  under coasting licenses. They have now acquired another ship to add to their fleet. Renamed Algonorth the ship is a Turkish-built ice class vessel of 12,164 grt, 16,979 dwt dating from 2008. Builders Tuzla Gemi Endustri delivered the ship as Gan-Gesture , but it was acquired by Swedish owners in 2009 and renamed Ramira. Under that name it had traded into Canadian waters previously, including trips into the Great Lakes. 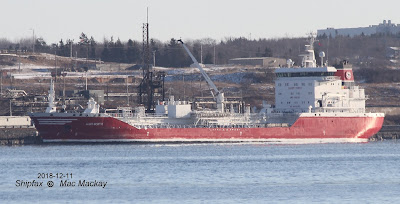 Algonorth has just arrived in Halifax on its first trip, having only arrived in Montreal November 28, and still wearing the red hull colours of its previous owners. The ship was registered in Halifax November 9, suggesting that we may see more of the ship running from Quebec ports to Halifax for Imperial Oil. Judging from the ship's name it is also likely it will heading north during the summer to supply arctic outposts. 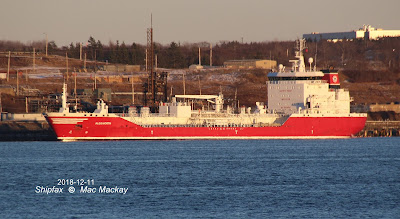 This is the second ship named Algonorth to serve in Algoma's fleet. The first was a bulk carrier built by Upper Clyde Shipbuilders in Govan in 1971 as Temple Bar for Lambert Brothers. It was a 13,545 grt, 22,157 dwt  powered by a pair of Ruston engines delivering 6,000 bhp to a single controllable pitch screw.  It was re-engined in 1974 with a pair of new Werkspoors of the same power. 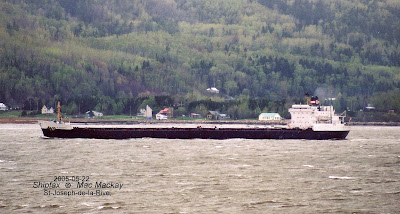 In 1976 Nipigon Transports purchased the ship and sent it to Jurong Shipyard, Singapore where it was lengthened 202 feet with a new mid-body to conform to Seaway size, measuring 18,496 grt, 28,481 dwt. Renamed Lake Nipigon it also served from 1984 to 1986 on charter to Misener Transportation as Laketon. Reverting to Lake Nipigon for a year it was sold to Algoma in 1987 and became Algonorth. It continued to run on the Lakes / St.Lawrence but was laid up for extended periods in the early 2000s until 2012 when it was sold for scrap to Marine Recycling of Port Colborne, ON and broken up.
Correction: The ship was last laid up in Thunder Bay and on July 13, 2012 it was towed out by Anglian Lady to Sault St.Marie, ON where it was broken up by Purvis Marine.