Despite the obscurity of the reference to ships, the Christmas carol "I saw three ships come sailing in on Christmas Day in the morning" has been a favourite for many years. As some spoil sport observed, Bethlehem is 20 miles from navigable water, and to see even one ship would require extraordinary visual acuity.

Sharp vision was not necessary this Christmas morning as three ships did indeed come 'sailing" in, although none were secure before noon.

Picking up its pilot at 1100hrs (AST) the self-unloading bulker Algoma Integrity (ex Gypsum Integrity) made its way through to Bedford Basin anchorage.

The ship will wait at least a day before it moves to National Gypsum to load. The ship has become a regular recently making one or two calls a month.

There was a stiff northerly breeze blowing and when the pilot boat returned it was bathed in spray. 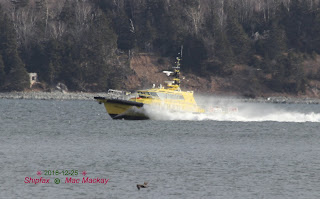 A little behind the scheduled 1130 hrs at the pilot station, as it moved from an outer anchorage,, CMA CGM Orfeo had plenty of time since it was not to tie up at Halterm before 1300 hrs. The tug Atlantic Bear met the ship well out and tucked in astern as tethered escort. Atlantic Fir also went past the Beach to take up position on the port bow, ready to turn the ship to back into berth 41 at Halterm. 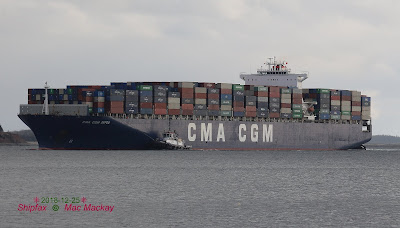 The ship is carrying boxes from all the partners in the Columbus JAX service: CMA CGM / APL, COSCO and Evergreen. As mentioned yesterday, the ship is chartered from Claus-Peter Offen interests, and that company's symbol is posted below the bridge, even with the top row of containers (Santa's gloved hand added by me). 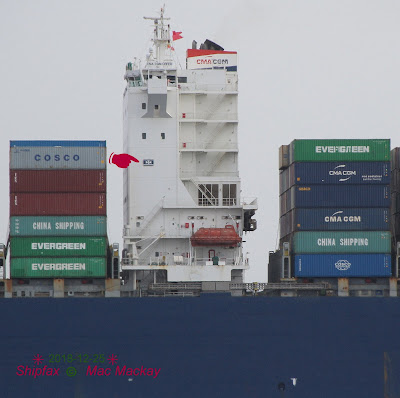 Last in, and self piloted, was Oceanex Sanderling returning from its weekly trip to St.John's.  It tied up at pier 36, filling the last berth at Halterm. (Asian Sun is still at pier 42 - see yesterday's post.) 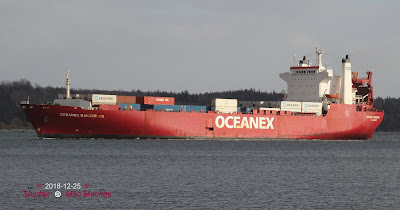 On deck is one of Canadian Tire's 53 foot containers. These are not normally "seagoing" since they do not fit normal container ship cellular cargo bays, but Sanderling can accommodate them either on skeleton trailers or lift on/ lift off.
The ship will off load tomorrow, then move to pier 34 for maintenance. Its next scheduled sailing is not posted online, so may well be in 2019.