Maersk Niteroi sailed Sunday afternoon after its first call on the Canada Atlantic Express (CAE). The ship is new on the run after making trips on Maersk's Mediterranean Montreal Express (MMX) in October and November. 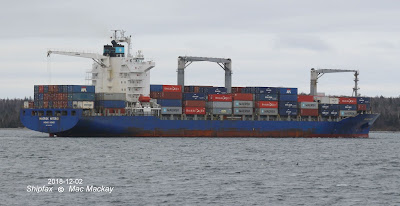 The CAE eastbound service runs from  Montreal to Halifax, Bremerhaven, Rotterdam and Antwerp.

The MMX runs westbound from Salerno, La Spezia, Fos and Algeciras to Montreal. Maersk will be dropping the Halifax call eastbound at least for the winter, with the final eastbound sailing expected to be - yes- Maersk Patras on Tuesday. That ship has just been transferred from the CAE service to the MMX. Maersk Palermo will be returning to the CAE.

Maersk Patras has had a major refit since this photo was taken in April after a hard winter running on the North Atlantic.

It is reported that Maersk will be adding two Med stops to the MMX, but will not add ships to the run, so in order to keep the weekly arrivals in Montreal, it has dropped Halifax. As previously reported it has already increased the size of the ships to meet demand.

Also there will be another new ship on the CAE service. Vuoksi Maersk is expected to show its face in Halifax  next weekend.

Confusing enough, but there is more. There may be a "one of" westbound call for one of the MMX ships in the next week or so.

Maersk has recently made it known that despite other companies such as state-owned COSCO and Japanese conglomerate ONE going out on the limb with more new huge ships, it will not order any newbuild  ships in 2019. Its share of the world container market has shrunk to 4.02 mn TEU from 4.11 mn TEU in 2018, even including its Hamburg-Sud and Safmarine divisions. Nor is the company contemplating more mergers. Global container capacity has increased 6% to 22.69mn TEU and it is likely that many other companies are considering consolidating and rationalizing their fleets when demand is not increasing as rapidly.

HAPAG-Lloyd for example seems to be taking a leaf out of CN's message of 2017 - when all else fails, improve customer service!  H-L has stated they will concentrate on quality in the hope that there is a demand for a premium service at a premium price, in exchange for reliability.

All lines are also facing new emission rules and will have to retrofit exhaust gas scrubbers to ships that burn heavy fuel (that is most of the ships) at great expense, with no measurable return to cover the cost, not to mention lost time at sea while the conversions take place.