First timers and an old timer

Two ships arrived in Halifax today, both of which are new to me, and one that is of long acquaintance.

The tanker Kivalliq W is a first time caller. Named for a region in Nunavut, stretching inland from the western shore of Hudson Bay, and the people who live there, the ship also has the letter 'W" for the Woodward Group. The ship's owner, Coastal Shipping Ltd, is part of the Woodward Group of companies, based in Happy Valley Goose Bay, Newfoundland and Labrador. Their tankers deliver fuel to many far northern communities during the shipping season. 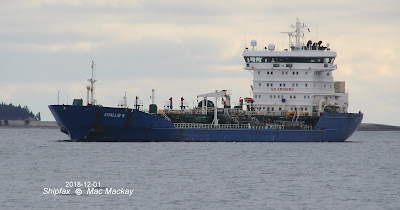 Kivalliq W was built in 2004 in Jiangyang Shipyard, Shanghai as Falcon for Norwegian owners Utkilen AS. In 2009 it was renamed Sten Fjord when management was taken over by Sternersen AS, also of Norway. In 2016 Coastal Shipping registered the ship in Canada and it operated as Sten Fjord. Each year from December to June the ship reverted to Marshal Island registry and traded overseas. In June of this year when it returned to Canadian flag it carried the new name Kivalliq W.

Since December 1 has been the normal re-flagging date for the last two winters it will be interesting to see if that change occurs while the ship is here. It is unloading a cargo from Quebec at Imperial Oil's number 4 dock.

The auto carrier Onyx Arrow arrived from Portbury, UK (opposite Avonmouth and near Portishead) sporting a blue and green colour scheme which I have not seen before. Owned by the single ship company Onyx Maritime, it is managed by Ray Carriers and Stamco Ship Management , but is wearing a K-Line funnel mark, so is on some form of charter. Usually such charters have the ship painted in the colours of the charterer, but obviously not in this case.

Heading northbound in the Narrows with tugs Atlantic Willow and Atlantic Bear.

Built in 2006 by Stocznia Gydnia in Poland the ship 57,692 grt, 21,087 dwt ship. Once the ship completed its work at Autoport it move to pier 9C via Bedford Basin where it was turned to come alongside starboard side to. I am assuming the ship has some repairs to perform or possibly has damaged cargo to unload. More may be known tomorrow. 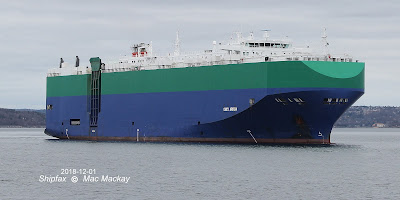 Turned and heading back into the Narrows.


At IT Telecom's pier 9B the icebreaker Polar Prince has returned to port after a summer of working in the far north. It sailed from the same pier July 6. The former CCGS Sir Humphrey Gilbert was working deep into Hudson's Bay, using side scan sonar and gravity coring to survey the marine route for a fibre optic cable that will eventually link communities on the east coast of the bay in the Nunavik region. Using side scan sonar, the ship was accompanied by the Leeway Odyssey (also based in Halifax and which returned to The Cove a week or so ago).  The cable is expected to be laid in 2021. 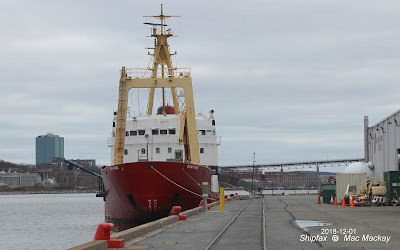 The ship, which is Canada's only commercial icebreaker was built by Davie Shipbuilding in 1959 and refitted with a new bow by Halifax Shipyard in 1985. Although retired from the Coast Guard in 2000 the ship has made many northern trips since, including last year's sesquicentennial circumnavigation of North America.It is due to spend the winter in its home port of Lunenburg.