Although the horizon was hard to see through snow squalls, the ship named Horizon was a little more visible as it made its way inbound for pier 9B.

Bulk carriers have been rare sights in Halifax in any event, but even more so now that there is no bunkering tanker in the port.  Tugs were  made up to turn the ship in the Narrows to tie up at pier 9B - a berth usually assigned for repairs. The ship had been under Port State Control detention in Port Alfred for four days, November 30 to December 4,  so its visit here is likely to follow up on the numerous deficiencies found in that inspection. 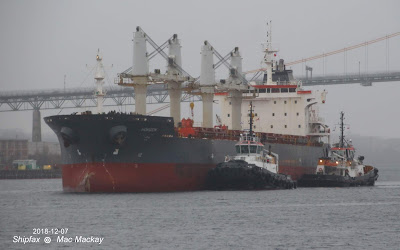 The ship is in ballast, arriving from Port Alfred, La Baie, QC. It is a bit unusual as bulkers go because it was not built at one of the more likely shipyards in Korea. Instead it comes from the Indian state owned Hindustan Shipyard in Visakhapatnam. Built in 2007 as Good Providence it became Bulk Providence in 2013 and Horizon in 2014. It is currently managed by Goodearth Maritime, a company based in India and part of the Archean Group, primarily a resource company.  The ship is equipped with four cranes and grab buckets for cargo handling and measures 19,891 grt, 30,193 dwt.