Early morning in Halifax harbour can be quite spectacular.... 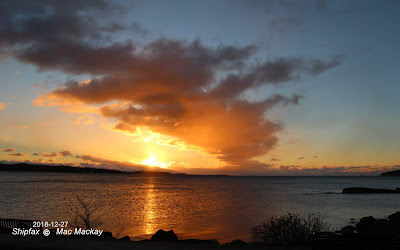 At 0800 hrs the sun began to show above some cloud behind Macnab's Island.

However it does make it nearly impossible to photograph inbound ships from the Halifax side of the harbour. Nevertheless I made an effort to catch Jennifer Schepers as it made its way to Halterm for ZIM. It is one of the line's two feeder ships that make a weekly run from Halifax to the Kingston, Jamaica hub to connect with other ZIM services. 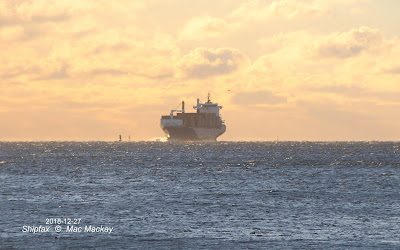 Distortion and refraction makes the ship's hull appear higher than it is.

Jennifer Schepers was launched in 2009 as Mistral Strait by Taizhou Kouan Shipbuilding Company in Taizhou (part of the China Commerce Group.) It was immediately renamed BF Copocabana, and carried that name until 2016.  The 21,018 grt, 25,775 dwt ship can carry 1795 TEU (including 319 reefers) and carries a pair of 45 tonne cranes. In 2016 owners became HS Schiffahrts of Ems, Germany and the ship was renamed Jennifer Schepers. The Schepers family has operated in shipping since ca. 1858 when Capt. Heinrich Schepers acquired his first vessel. The fourth and fifth generations of the family run the concern today.
Earlier this year they combined with five other companies to jointly market their container feeders under the Arkon Allied Container (AAC) brand, but the owners remain independent. 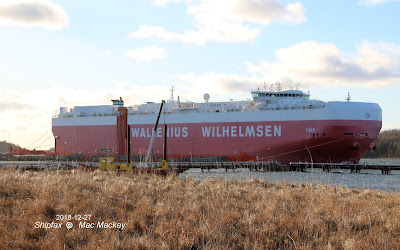 A construction crane is set up to work on the McAsphalt jetty adjacent to Autoport.

An earlier arrival was Wilhelm Wilhelmsen's Tiger at Autoport. Arriving before sunup, it required a trip to Dartmouth to catch the ship in more favourable light. The 74,255 gt, 30,140 dwt ship, built by Daewoo, Okpo in 2011 is a 7th generation autocarrier of the 7800 CEU class, but capacity is quoted as 7,934 cars. 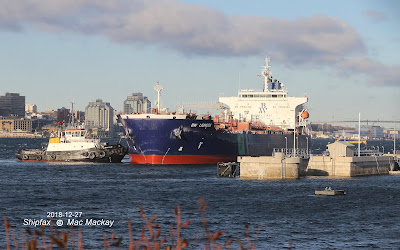 Irving Willow pushes up on the bow to bring the tanker alongside Irving Oil's Woodside terminal with a cargo loaded in Amsterdam..

Staying with the large African feline theme, BW Lioness arrived with the sun behind it at Irving Oil, and could only be photographed decently from Dartmouth. It is a fairly typical tanker of 29,737 gt, 49,999 dwt, built in 2014 by SPP Shipbuilding Co in Geosong and originally named Elandra Lion. 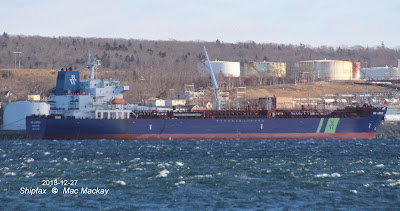 It changed owners (and gender) in 2014 when the BW Group acquired ten product tankers from the Elandra Tankers fleet and in 2016 formed BW Tankers as a separate product tanker company within the BW Group, with financial partner PAG.

BW was formed in 2003 when World Wide Steamship Company (founded in the 1960s by Sir Yue-Kong Pao) acquired Bergeson d.y. ASA of Stavanger, Norway and formed Bergeson Word-Wide , abbreviated to BW. The result is a conglomerate of companies in tanker and drybulk shipping and offshore floating structures. BW Tankers alone has more than 50 product tankers, but the total BW fleet includes about 300 ships, many of which are crude oil and gas tankers operating in their own fleets such as BW LPG and BW LNG. 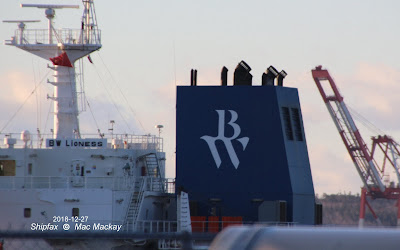 The Bergeson Word-Wide initials are prominent on the funnel and hull stripe.

Early in 2019 a merger with Hafnia Tankers is expected to be finalized. Hafnia based in Denmark by former Torm exectives, has 37 product tankers in its fleet. The resulting 86 ship product tanker fleet will be one of the largest in the world. At the same time BW may be selling off its 15 chemical tankers. 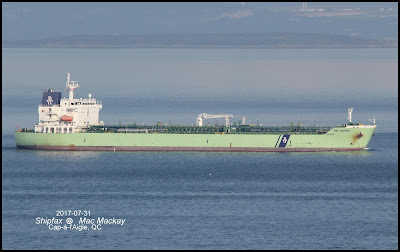 BW's chemical and other tankers have green hulls. Bulkers and some product tankers have blue.
BW Osprey seen here on the St.Lawrence is one of 22 Medium Range (49,999 dwt) tankers in the fleet. The colours of the hull strip are reversed blue for green.

BW tankers are noted for their elaborate colour scheme, unlike many other tanker operators in the word. A case in point is Star I which arrived last night for Imperial Oil.

Star I , operated by Scorpio [see the recent takeover of Nordic American Offshore by Scorpio Offshore, thwarting Horizon Offshore's bid] , is a 23,248 gt, 37,900 dwt product tanker from Hyundai Mipo, Ulsan. Built in 2007 as Alcor for Turkish operators, it was renamed in 2013. The ship has been in Halifax several times since 2015 bringing in refined product for Irving Oil and for Imperial Oil. On this trip its last port is given as Baton Rouge, LA.