Sunrise to Sunset and more on W. tankers

Although it only shows as a pin point, just to the right of centre on the horizon - there is a ship out there. [0730 hrs AST]

To my surprise there were bright lights on the horizon at sunrise this morning - I wasn't expecting any ship arrivals, so it took time to realize that it was Qikiqtaaluk W.  anchored (again) outside the port. After repairs were completed yesterday at pier 31 the ship sailed, still giving Savannah as its destination, but instead appears to have made a short sea trial and anchored outside the pilotage zone. However early this evening the ship did get underway and last seen (on AIS) was headed south, still for Savannah.

After yesterday's speculation about sister ship Kitikmeot W. I see a pilotage order for 2200hrs this evening for the ship to move from Imperial Oil to pier 27. This may be for change of flag and crew change.

There was some ship activity in Halifax today, but mostly after dark and of familiar ships. After showing several sunrise photos, it is time for a sunset shot- this time taken from the excellent vantage point that was the once the Dartmouth Marine Slip Long Wharf, now turned over to residential development. 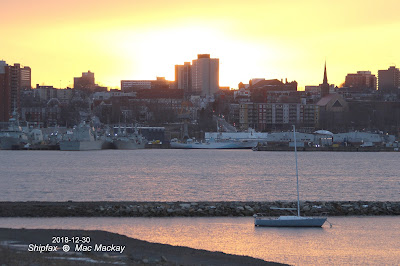 Looking straight across the harbour at HMC Dockyard, HMCS Sackville is dead centre. A lone sailboat remains at anchor in the new yacht basin created off the old shipyard.
To the left HMCS Halifax (stern to us) and all of the Halifax based Maritime Coastal Defence Vessels are tied up for the holidays.
The spire to the right is St.Patrick's church and just to the left of that is the bulk of the Halifax Armories, now under restoration.
[1630 hrs AST]