The United States Coast Guard cutter Abbie Burgess WLM-533 made a brief stopover in Halifax on its way back to its home base of Rockland, Maine. The ship had made an unusual trip away from its home territory that normally extends along the Maine coast as far as the New Brunswick border.
On November 7 I noted the ship passing Halifax on its way to the Great Lakes. After a stopover in Montreal the ship assisted with the autumn buoy removal process in US waters, making its way up through the St.Lawrence Seaway November 16 to Lake Ontario and on via the Welland Ship Canal into Lake Erie. Apparently USCGC Mobile Bay and USCGC Alder, based on the Lakes, were unavailable for the work. After completing the assignment the ship reversed the process sailing down through the Welland Canal December 4, the Seaway December 6 and 7 and arriving here last night. 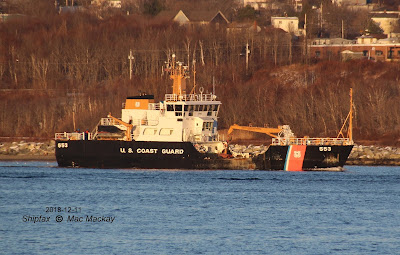 After an overnight stop at the former Canadian Coast Guard base in Dartmouth, Abbie Burgess heads for sea.

It is not the only connection the ship has with the Great Lakes, because it was built in Marinette, WI in 1997 as one of several ships in the Keeper class of small buoy tenders.

Here is a link to the story of Abbie Burgess: https://en.wikipedia.org/wiki/Abbie_Burgess