The Canadian Coast Guard has taken delivery of a new ship and transferred patrol vessels to cover for sahips in refit and under repair.

In Quebec City, the CCGS Captain Molly Kool has joined the icebreaker fleet after an initial refit. The former supply vessel Vidar Viking is the first of three icebreaking ships purchased from Sweden last summer to supplement the fleet. Named for the legendary Saint John, NB woman who became the first Canadian female to be licensed as ship's captain, it will work on the St.Lawrence and Saguenay Rivers and Gulf this winter. Meanwhile the two sister vessels Balder Viking and Tor Viking will be fitted out for service in the north next summer. At that point Captain Molly Kool will complete its refit. Its base will be St. John's NL.

Patrol capability on the east coast has been supplemented with the transfer of Corporal Teather CV  and A. Leblanc from the Central and Arctic Region. The Halifax based Corporal McLaren M.M.V.  was damaged in drydock and will be out of service for repairs, leaving only G.Peddle to carry out patrols. All the patrol boats of this class were built at Halifax Shipyard. 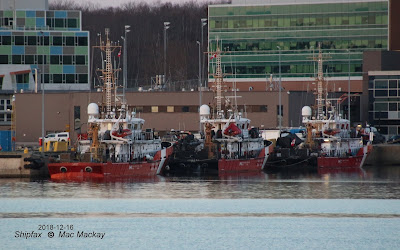 The  A. Leblanc, G.Peddle and Corporal Teather tied up in a row at the BIO this afternoon.