Return of the Prodigal Sun

After yesterday's wintry conditions, it was a return to sunny conditions and better photos today.

The tanker Arctos arrived during all that snow yesterday. 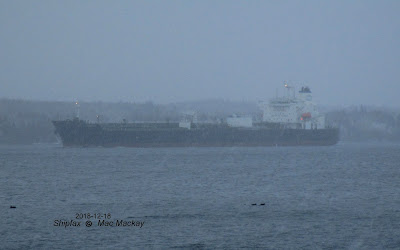 But looked a little clearer today tied up at Irving Oil's Woodside terminal unloading its cargo of refined products loaded in Amsterdam. Irving Oil seems to be importing at least as much fuel for local use as it is producing in Saint John. The vast majority of the product it makes in Saint John is exported to the US.

Arctos is a typical 29,608 grt, 49,999 dwt product of Hyundai, Mipo. It is very new however, delivered in July of this year. Owned by the obscure Libero Panama SA, the ship is managed by Sea World Management and Trading of Liberia (but operating from Greece). Another tanker under its management was found to discharged oil and waste in US waters in 2017 and the company was fined $2.25 mn and the ship's master was jailed for six months.

At Imperial Oil it was possible to get a glimpse of the oddly named Alpine Marina. The ship's name conjures up images of a Swiss yacht club, but is more likely taking a woman's given name.  The ship is another Hyundai Mipo product tanker from 2010, measuring 29,130 grt, 46,162 dwt. It arrived Sunday from Port Neches, TX. Its owners are the improbable Tornado Navigation Inc, and managers Oxygen Maritime Management Inc of Greece. That company manages four ships for Greek owners who are currently embroiled in mortgage and financing issues with creditors . The ship is registered in the Marshal Islands. 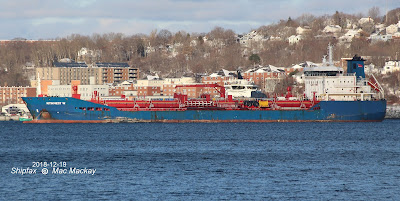 The Canadian flag Kitikmeot W was acquired by Coastal Shipping Ltd earlier this year from Turkish owners and was among the first of a wave of new tankers acquired by Canadian owners recently. Both Algoma Tankers and Desgagnés / Pétro-Nav have also added to their fleets. Now McKeil Marine has announced that they have purchased two Turkish built tankers. Currently named Topaz-T and Turquoise-T.
The pair are trading in the far east, so are unlikely to be seen in Canadian waters before spring.

At Halterm the 9415 TEU CAM CGM Fidelio arrived with the appearance of being fully loaded. 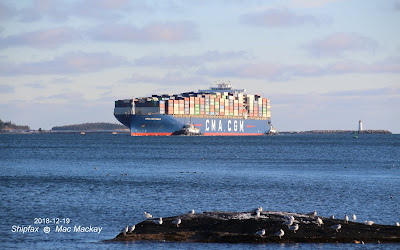 This is good news for the Port of Halifax and the terminal as tenders closed today for Phase 2 of the South End Container Terminal Expansion which will allow for two ship's of this size or larger, to berth at the same time.

Phase 1 - the tender for dredging was awarded to McNally Construction last month, and although the dredge and support plant have been mobilized, work is not expected to start until January.

Phase 2 - the construction and placement of the caissons and pier extension is the larger portion of the project, and although the contract has not been awarded yet, the tender results from today are:

Once construction starts the winter bird life may be disturbed somewhat by all the activity. This suspicious looking loon may be among them. 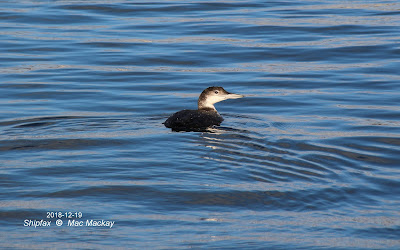 East Coast North America port trends indicate that ships of up to 14,000 TEU are now calling, and the worry is that the extension will still not be big enough.