STQ Ferry Woes: CTMA to the rescue - and a book

We have been accustomed to hearing about ferry cancellations due to weather. Marine Atlantic certainly has had its share of these during the autumn and early winter of 2018 as very high winds lashed the Cabot Strait. Northumberland Ferries Ltd had its share of cancellations too, but has shut down for the winter, and will not resume service until May 1, 2019.

Bay Ferries also had weather cancellations on its Digby / Saint John service but is showing its schedule running daily from January 6 to 31. Last year the ship was out of service for maintenance from January 27 to late April.

La Société des Traversiers du Quebec (STQ) it seems has a different problem - its major ferry is out of service. Pride of the fleet was to have been F.-A.- Gauthier built by Fincantieri, Castellamarre di Stabia, Italy, and which entered service in July 2015. It was removed from service December 16 due to "technical issues". STQ has now announced that the ship will have to be drydocked for two weeks starting January 16, for access to its props. 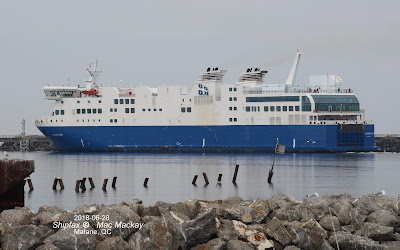 F.-A.-Gauthier departing from Matane - something it won't be doing commercially for a while.

As the only ferry serving the lower St.Lawrence - it runs from Matane to Baie-Comeau and Godbout - it is an important service for cars and trucks to and from a large segment of the north shore. [ Transport Desgagnés' Bella Desgagnés serves the lower North Shore from Sept-Iles easward from Rimouski.]

STQ has no backup ship to operate the service, so travellers are faced with a very long drive west to reach the Rivière-du-Loup / St-Siméon ferry Trans St-Laurent. However that ship runs only until January 2 when it lays up for the winter It is usually down to one trip per day this time of year, but for now is making two trips. When that service closes the alternative is via Quebec City - two hours driving (plus in winter) west of Rivière-du-Loup, and nearer to three hours from St-Siméon. 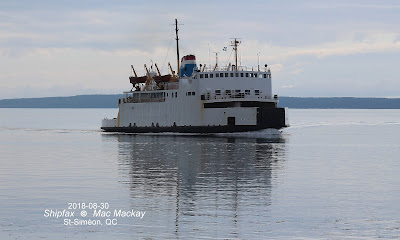 Trans-St-Laurent will soon be laying up for the winter.
It plies a shorter (20 miles) and calmer route, from April to January 2.


Fortunately for pedestrian travelers STQ is providing air service between Mont-Joli, Baie Comeau and Sept-Iles. But that is no comfort to drivers facing a 10 to 12 hour drive from Sept-Iles to Rimouski via Quebec City, for example.

[Two other ferry services operate on the Lower St.Lawrence, with smaller ships. The Forestville / Rimouski and Escoumins / Trois-Pistoles ferries are seasonal only and are shut down for the winter. There is a question if the latter will operate in 2019.] 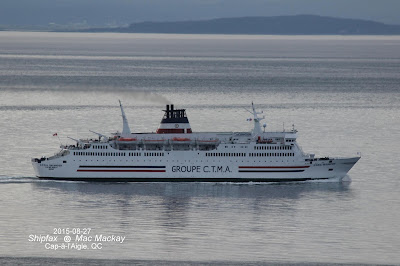 C.T.M.A. Vacançier runs weekly for eight months of the year to and from Montreal and Quebec City to Cap-aux-Meules (Grindstone).

Fortunately there is some relief at hand. The Magdalen Islands cargo and passenger ferry C.T.M.A. Vacançier will become available January 8. It normally runs between Montreal, Quebec City and the Magdalens, and will substitute on the Matane / Baie-Comeau route for a time. However it usually switches to the Souris PE- Grindstone service in winter because it has an ice class rating.

Since the upper photo, the ship's banner has been changed to read "Croisières C.T.M.A." Here it is making a steady 15 knots as it passes the tanker Green Planet doing a more sedate 11.5 knots.


C.T.M.A.'s other ferry, Madeleine is fully occupied running between Souris, PE and the Magdalen Islands, but usually lays from January to April during the heaviest ice season. 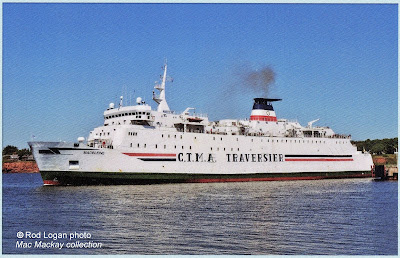 I received this wonderful photo of Madeleine as a Christmas card this year.

C.T.M.A. - full name Co-opérative de Transport Maritime et Aérien- also has a service using the C.T.M..A Voyageur running from Matane in winter. When it is activated, it will free up C.T.M.A. Vacançier. 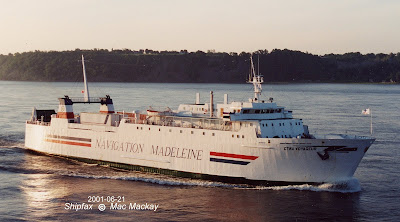 C.T.M.A. Voyageur making a good turn of speed on the St.Lawrence en route to Montreal.
It has not operated up river in recent years.


Shipfax has covered C.T.M.A. many times before, [ just enter CTMA in the search box and see what pops up] but for their connection to Halifax, see:

Speaking of the Magdalen Islands, I commend the author of a recently published book on a very thorough and interesting project. "The Pictou-Magdalen Islands Run 1874-1960 (The Days of the Coal Burners)." is an excellent history of a little known aspect of eastern Canadian shipping. Situated as they are in the middle of the Gulf of St.Lawrence, the Magdalen Islands are nevertheless part of the Province of Quebec. They are closer to the Maritime Provinces, so it is little wonder that the shortest connection to the mainland was through Nova Scotia. Mail, passengers and freight made their way through often harrowing conditions and sub-standard craft out of necessity. The book is the history of each of the steamships that operated the mail service.