Aside from tone container ship, and the mandatory autocarrier, there was a preponderance of tanker activity today.

The ship's last port of call was Portbury, UK and it is destined for Cristobal, Panama.

Imperial Oil wasted no time in sailing one ship and berthing another. Star I [ referred to as Star i , not Star one] sailed for Freeport, Bahamas.

It passed the inbound Kitikmeot W. at Middle Ground, which went directly to number 4 dock.

Kitikmeot W. appears to be shuttling from Montreal as is Algonorth, reducing the need for imported product. If so there is a chance it will be remaining under Canadian flag for the winter.

Meanwhile Kitikmeot W.'s sister ship Qikiqtaaluk W., which has been flagged out for the winter, is at pier 31 for repairs, but is expected to sail this afternoon evening. It has what was described as a "propulsion failure" after leaving Montreal December 23, and presumably another yesterday, when it had to be towed into port. 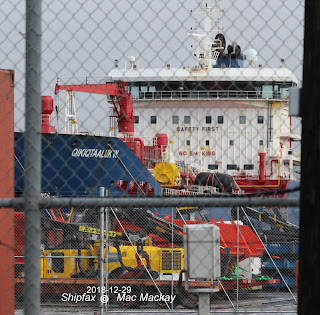 Through fences and between poles, and over machinery - the fleeting glimpse of pier 31.

Trade to Cuba must be booming, as Melfi is bringing in larger ships all the time. Also the ships are gearless, indicating better container handling facilities in Mariel.

The lone container ship today is Artemis for Melfi Lines. The 26,358 gt, 34,439 dwt ship has a 2546 TEU capacity. Built by Jiangsu Yangzijiang Shipyard, in Jiangyin, China in 2008 it has carried the names 08: TS Korea, 08: Artemis, and 17: Independent Venture and was renamed earlier this year under the management of Peter Doehle. It is due to sail later today.