Something old, something new

It was a bit of a mixed bag today, but given the bright sun it was hard not to take photos of everything.

At Halterm (we are supposed to say South End Container Terminal, since Halterm is the operating entity only)  CMA CGM Fidelio was quite late in getting away. It was scheduled to leave at 0400 hrs, but did not sail until 1130 hrs from pier 41. 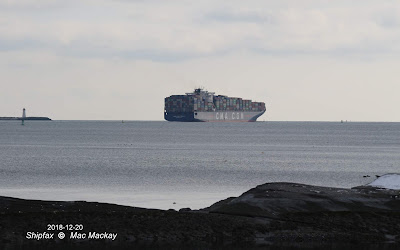 
Pier 42 was already occupied by the early morning arrival RHL Agilitas for Zim.

Pier 41 was soon occupied again by JPO Aries arriving for the first time for Melfi Lines on its Voyage 001, replacing Jona. It is German owned by the J-P Oltmann Group and has sailed under several names since built by Aker Werft, Wismar in 2001. Built as JPO Aries it was renamed in the same year as TCL Challenger, and in 2002 became Trade Rainbow and in 2005 MOL Dream. It kept that name until 2012 when it reverted to JPO Aries.

JPO Aries takes its tug to assist in turning off Halterm.

The ship has a capacity of 2470 TEU, including 400 reefers, and carries three 45 tonne cranes. Melfi charters are continually increasing in size and this one measures 25,361 grt, 33,937 dwt.

With all Halterm berths full (Nolhan Ava occupied pier 36) Oceanex Sandelring remained at anchor after unloading and loading at Autoport.  It is not often that the ship is seen idle, as it keeps up its busy weekly run to and from St.John's.

Still looking good after all these years: Oceanex Sanderling is not often idle.

A veteran ship, built in 1977, it is apparently ideal for the  St.John's service, carrying container and RoRo cargoes. In addition to cars, most of which are worked through Autoport, it carries numerous truck trailers with a variety of freight to and from Newfoundland. It is also one of the few ships that caries 53 ft container to sea. Although it has been refitted many times, it must inevitably be replaced.


There has been speculation over the years that one of the Stena Lines ships might make a good replacement. In fact two of those ships have been used while Oceanex Sanderling and Oceanex Connaigra were in refit. Both Stean Foreteller and Stena Carrier appeared to be suitable. 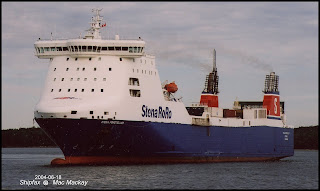 The sleek Stena Foreteller was called in to substitute for Oceanex Sanderling during a refit period.

However Stena Lines has found a ready buyer for one ship of the same class in Blue Origin, a US company that transports rockets and launcher components to Port Canaveral. Earlier this year Stena Carrier was sold to Baja Ferries and renamed Mexico Star. In November Stena Foreteller and Stena Freighter were also sold, but the new buyers have not been disclosed yet.

Stena Lines have been the suppliers of numerous ships to Oceanex's prime competitor Marine Atlantic. Another deep background feature on Canadian Stena ships is upcoming in the next few days.

Also at anchor awaiting a berth at Imperial Oil, Algonorth is back again on its second trip of what may become a routine shuttle from Montreal.

Algonorth looks spectacular in its inherited red paint. Some frozen spray forward blends in with the white painted deck. Someday the ship will be painted in Algoma Tankers standard colours of deep blue hull and cream superstructure.

With two ships at anchor the pilot on the next inbound opted to pass west of George's Island, giving an opportunity for a close up Brotonne Bridge. 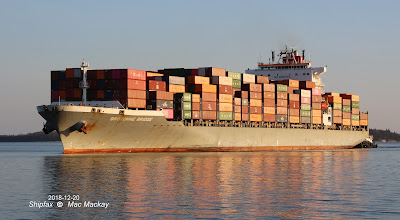 
Despite my pronouncement December 10: end-of-line , the AL6 service did not end on that day. No further sailings were shown on port schedules at that time, so this may or may not be the last call either. THE Alliance announced September 27 that the service would end in December, so it is possible that one more ship may show up next week.

Another new-to-Halifax autocarrier showed up later in the afternoon. The oddly named Morning Conductor carriers the EUKOR [EUrope KORea] banner of its commercial managers on its side, but its technical management is by Wilhlemsen Ship Management Korea Ltd. Current owners are listed as the opaquely named MP-PAN SA, which list three Japanese diectors and the usual Panamanian non-entities as "suscriptors" in its Panamanian registration documents. They appear to be associated with SBI Leasing Services Co Ltd, a Tokyo based financing and leaseback company that caters to the shipping industry.* 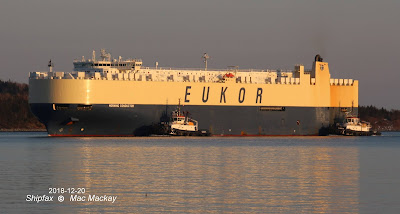 Two tugs make up to the Morning Conductor to help it make the turn toward Eastern Passage and Autoport, catching the last rays of afternoon sun.

*As you may have noted I have become more descriptive of the actual owners of ships in recent posts - if I can determine who they are. Thanks to the so-called Panama papers and other sources, more information is now available as to the actual or beneficial owners of ships.
.
Posted by Mac at 7:33 PM