The day before Christmas can be a busy one in the port, since Christmas Day and Boxing Day are 'no work' days for longshoremen. Ships do not wish to sit idle in port for two days, so they try to get their work done and get away to sea.

There are several ships working to get away today. The sister ships Asian Moon and Asian Sun are in port - but for different lines. Asian Moon is busy unloading its nickel concentrate cargo at pier 31 (regrettably no longer photographable due to Halterm expansion) for Nirint Lines. It will sail late morning.

And arriving appropriately at sunrise this morning was Asian Sun for Tropical Shipping. 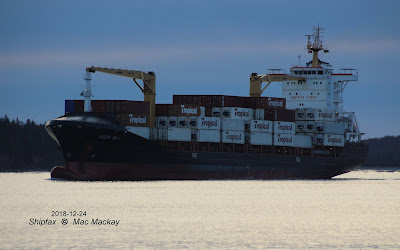 There is no posted sailing time for it, so it may be here over Christmas.

Meanwhile the CMA CGM Orfeo anchored offshore early this morning. The 11,249 gt, 120,986 dwt ship was originally due yesterday, and is now slated to arrive in port tomorrow. Linehandlers (members of the Longshoremen's union) will get a hefty paycheck to tie the ship up if in fact it does berth on Christmas Day. 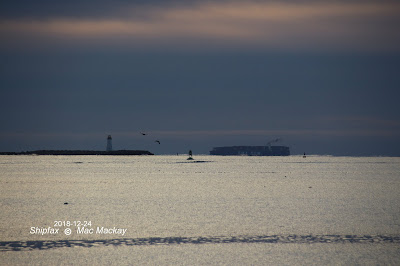 Built in 2008 by Hyundai Heavy Industries, Ulsan, the ship has a capacity of 9658 TEU, including 700 reefers. Normally these CMA CGM ships called on Saturdays, but for the last month they have been in port on Tuesdays or Wednesdays.

Also due at Halterm tomorrow, Oceanex Sanderling will berth at pier 36. It often takes time off over Christmas.

ACL's Atlantic Sail departed late morning. At first it was into a dead calm and gloomy Bedford Basin. 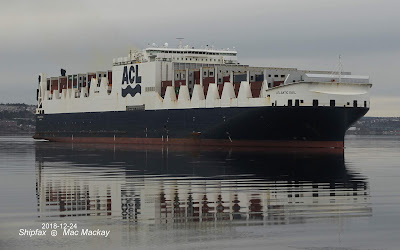 By the time the ship cleared the Narrows there was bright sun as the ship passed west of George's Island bound for Liverpool. 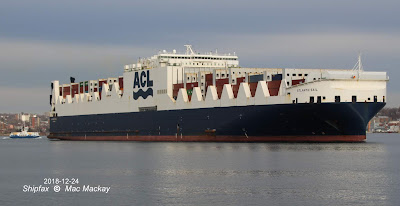 Also sailing this morning was Atlantic Huron. The CSLer has a load of gypsum for Cote-Ste-Catherine, QC. 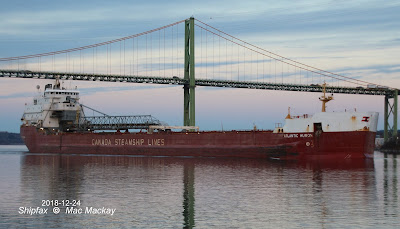 With the St.Lawrence Seaway set to close December 31, it is expected that the ship will just manage to unload then move to Montreal for winter layup. Last year it laid up there from January 14 to March 17.

Last winter Radcliffe R. Latimer laid up in Halifax from January 6 to March 18. This year it sailed from Halifax December 14 with a load of gypsum. 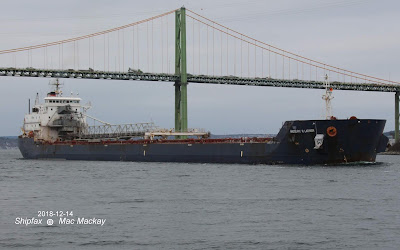 It reached Goderich, ON on Lake Huron, loaded salt and sailed yesterday for Johnstown, ON, just above the Iroquois lock. It is also likely to leave the Lakes before the close of the season.

The oil docks normally work on Christmas, as their shore workers are not members of the ILA. Irving Oil's Acadian is due this evening, so may be in port Christmas Day. So far there are no scheduled arrivals at Imperial Oil. 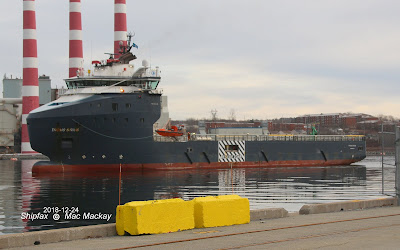 It likely has equipment to land from the rig, and then will probably layup as it has no other scheduled work. Fleetmate Lundstrom Tide is already laid up at The Cove. Both vessels, on charter from Tidewater to Horizon, will likely be unemployed for a time. 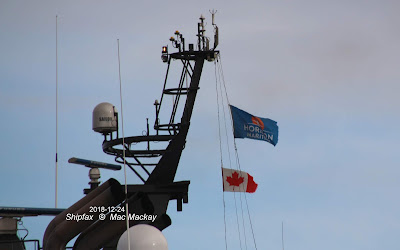