Two interesting tanker visits today will have to remain largely unillustrated for now, due to heavy snow reducing visibility and mobility.

The Qikiqtaaluk W., noted in a previous post, was anchored off Halifax for a time. Very early this morning it entered Halifax harbour, made a sharp turn in number one anchorage and returned to sea. (It may have rendez-voused with a launch.) However after disembarking its pilot it made a slow sweeping turn and anchored well offshore. 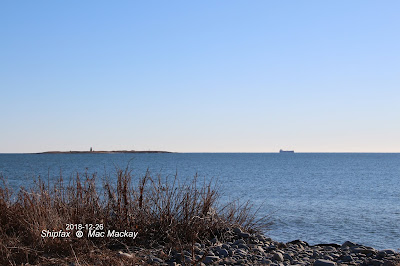 Qikiqtaalulk W. as originally anchored, with Devils' Island to the left..
This morning the launch Eastcom went out to the ship, and later tugs were called to tow the ship into port, as a "dead ship". Atlantic Oak and Spitfire III were assigned to the task and brought the ship in, picking up a pilot on the way. Without the use of its engines it tied up at pier 31. Obviously some form of propulsion issue is at the root of problem. An update will be posted when available.

The ship is sailing under Marshal Islands flag, having been bareboat chartered out for the winter by Coastal Shipping Ltd (Woodward Group of Newfoundland) and was heading for Savannah.


Irving Oil's Woodside Terminal was a busy place - BW Lioness sailed this afternoon. As soon as the tugs Atlantic Oak and Atlantic Willow were freed up, they immediately went to the inbound Bro Agnes and berthed it. The ship is due to sail again in a few hours, indicating that it must have only a very small amount of cargo.

In 2017 Maersk Tankers A/S, the tanker operating arm of AP Moller-Maersk, became independant when members of the Moller family trust APMH Invest A/S acquired the company. [AP Moller-Maersk is divesting various divisions to concentrate on container ships, but the AP Moller family is buying some of those divisions.]

But back to Bro Agnes. Since July 2018 the ship has had three coasting licenses to operate in Canadian waters. Two for Pétro-Nav and one for Algoma. It may have had ealrier licesnes as several were issued to unnamed tankers.
In all cases it was carrying "dirty" or "black" product, that is to say Heavy Fuel Oil (DPP) material that is a byproduct in refining gasoline and diesel, for which there is littlke demand, and is sent to Tracy, QC where it is stored for resale.
The ship's last trip is interesting however. It was anchored off the Escoumins pilot station for a time, then sailed up the Seaway to Sarnia, ON, arriving December 13. It then made its way to Nanticoke, ON for December 19, then sailed directly for Halifax.
Since its last coasting license expired December 10, this trip must have been to carry some other product imported from abroad, possibly and additive, which was in demand by Imperial Oil (Sarnia and Nanticoke) and Irving Oil in relatively small quantity.
The ship measures 12,162 gt, 16,791 dwt and is classed a a chemical and product tanker.

Pictures may be possible in the next few days. If so, this post may be updated or replaced.