There was a good deal of activity all at the same time later in the afternoon with departures and an arrival.

Algoterra sailed from Imperial Oil. It is giving Quebec City as its destination, so may be going for another shuttle run. [see previous post.]

The autocaarier Tortugas was sailing from Autoport, with its place to be taken by Graceful Leader. The two ships met in the number one anchorage area where there was room to pass. 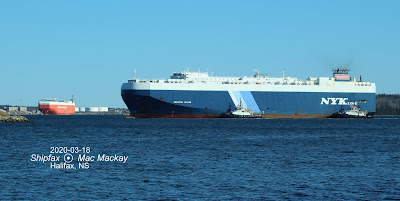 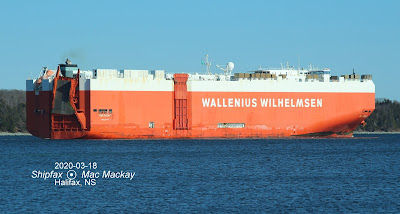 Such are the vagaries of international shipping that the nationalities of builders and operators bear no connection to each other.
Graceful Leader was built in 2007 by Stoc. Gdynia in Poland. The 57,692 grt, 20,986 dwt ship operates on a charter the Japanese company NYK Line.
Tortugas a 61,321 grt, 19,628 dwt ship dates from 2006 and Mitsubishi HI in Nagasaki. It is chartered to Wilhelmsen, a Norwegian company.

Also sailing this afternoon was CCGS Louis S. St-Laurent (which I missed) headed back to the Gulf of St.Lawrence, and CCGS Sir William Alexander, which does not appear to have taken fuel from Edward Cornwallis. (see yesterday's post). It headed southeast. 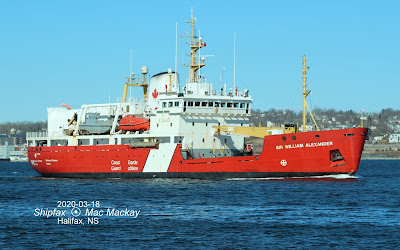