Algoscotia back to work [and File Box Friday]

It was back to work this afternoon for the coastal tanker Algoscotia after a layover in Halifax for maintenance. The ship arrived February 21 and after discharging cargo at Imperial Oil it moved to anchor then to Pier 9B on the 24th. 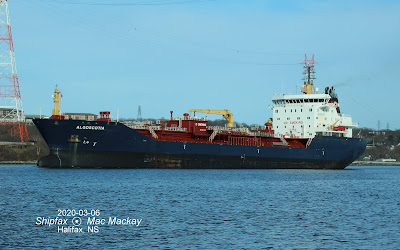 Algoscotia left Pier 9B  for Bedford Basin where there was room to turn round. It then headed to Irving Oil's Woodside terminal to refuel.

Built in 2004 by the Jiangnan Shipyard Group at the Qiuxin yard in Shanghai, the 13,352 grt, 18,610 dwt double hulled tanker normally runs year round with a few weeks respite during mid-winter.  It is the second Algoscotia in the Algoma fleet.

When Algoma Tankers took over the Imperial Oil tanker fleet in 1998 they renamed the Imperial Acadia as the first  Algoscotia. That ship had been the first of a new generation of ice class ships designed by Imperial's in house naval architects.

Built by Port Weller Drydock in 1966, it was based in Halifax but traveled widely throughout the Atlantic region and into the north. 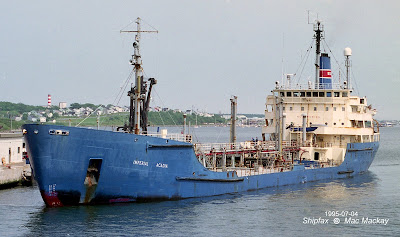 Algoma sold the ship in 2001 and after operating for McKeil Marine as Capt. Ralph Tucker it was broken up in Bangladesh in 2004 as Ralph Tucker. 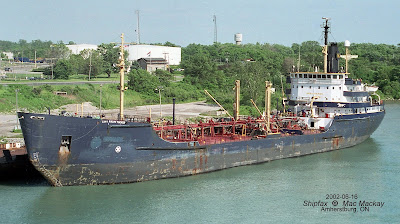 In its later years as a single hull tanker it was relegated to carrying brine.

The ship was lucky to have survived as long as it did. On January 30, 1990 the ship was caught by a storm while unloading at St-Pierre. Unable to get away in time the ship was battered against the pier and holed in several places. Severely damaged, the ship was loaded aboard the semi-submersible ship Mighty Servant 1 and brought to Halifax where it was rebuilt.

For approximately the same information about the first  Algoscotia see:
http://shipfax.blogspot.com/2015/04/imperial-oil-tankers-part-2-imperial.html