The Maersk / CMA CGM  joint transatlantic service skipped Halifax this past weekend. Ships of the line normally call in Halifax on Saturdays but there was no call this time. The line calls in Halifax eastbound only, after its Montreal call. 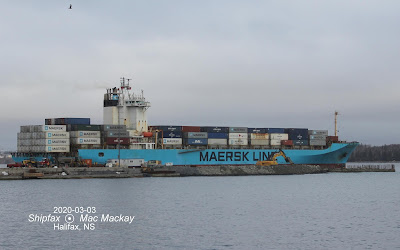 Maersk Patras sailing on March 3 passes the construction work extending pier 42.
(Since the photo was taken fill has extended beyond the crib on the far right.)

The ship that would normally have called this weekend, Maersk Patras  has fallen behind on its regular call date (it was last here on March 3, a Tuesday see: http://shipfax.blogspot.com/2020/03/near-normal.html).
This time round the ship has sailed from Montreal direct for Bremerhaven, skipping Halifax, perhaps allowing the ship to catch up on its regular schedule.

According to Maersk's published schedule the next regular calls on April 4 (ship EM Kea) and April 11 (Maersk Penang)and April 18 (Maersk Palermo) will take place on the regular dates, and Maersk Patras will be back April 24. As I have observed before, maintaining a weekly transatlantic service in winter with four ships is a grueling routine, and time lost can rarely be made up.