Getting a photo of two ships underway in the same frame is not particularly difficult in Halifax, if one is in the right place at the right time. Getting three in one is rare enough that it is worth a try. Today's possibility could have been done with a drone, or being positioned in a high building, but I had neither of those advantages and had to make do with a "twofer".

The autocarrier Columbia Highway was due to sail at 1530 hrs ADT. The ConRo Oceanex Sanderling was to take its place at Autoport in a move from PSA Halifax at 1630. While this was going on the small container ship CLI Pride was due to sail from Cerescorp / Fairview Cove at 1600.

The following is a sequence of photos, all taken from the Tall Ship's Quay, the closest vantage point to my home. 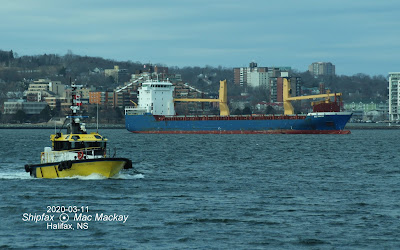 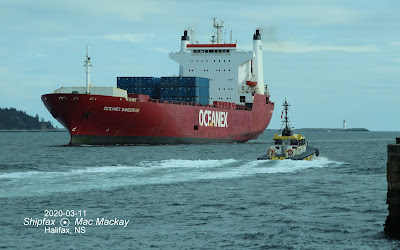 Oceanex Sanderling has cleared berth 41 and is headed northward.

Columbia Highway has rounded Indian Point and is halfway to Ives Knoll. 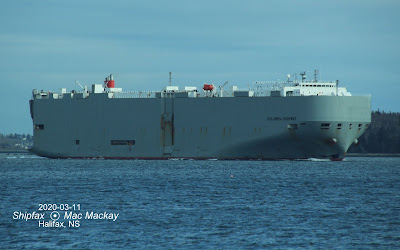 Speaking of George's Island, there has been much activity of late rebuilding the pier in preparation for a public opening this summer. The former cable ferry LaHave 2 , now with spuds installed, is the work platform for reconstructing the pier, along with a couple of sectional scows. 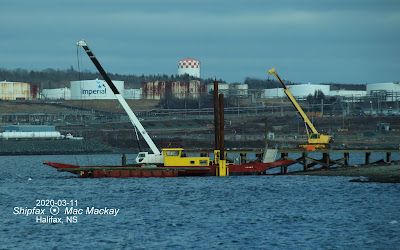