Today's arrival for THE Alliance is another MOL ship, MOL Marvel. It has been here before but I did not get an arrival or departure photo.

On its way inbound in the Narrows it passed CSL's Baie St.Paul. While waiting to take my picture I realized I missed an opportunity yesterday to take a "joke" photo. These photos were a  hallmark of the Halifax Chronicle-Herald and Mail Star newspaper  photographers of the 1960s, Wambolt and Waterfield. They were forever taking pictures with captions starting with lines like "It may appear that this seagull is carrying off the City Hall".
So here goes my tribute joke photo: 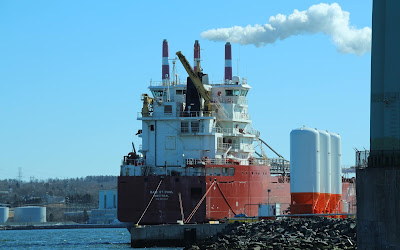 It may appear that Canada Steamship Lines is living up to its name with two of three funnels pumping out steam. Of course the chimneys belong to the Nova Scotia Power Corporation's Tufts Cove natural gas powered generating station, which is opposite to Pier 9, Richmond Terminals on the Narrows.