There was activity in the south end of the port today too.

At pier 27 the Bulgarian owned, Malta flag bulker Rila that arrived yesterday [see yesterday's post] was loading what appeared to be grain.

Most unusually the ship was berthed stern in. In all the years I have been watching ships in Halifax, this is the first time I can recall a ship loading at the grain spouts in the stern in position.

Amongst the boxes there is another of those bright green La Estancia trailers. I thought they had all gone out on the last Melfi ship, X-Press Makulu on March 3. See: http://shipfax.blogspot.com/2020/03/near-normal.html

There was activity at the oil terminals too, and it is a bit unusual.

At Imperial Oil it is Algoterra fresh from winter maintenance in Quebec City. The ship has not yet been repainted in Algoma colours since acquired last year. 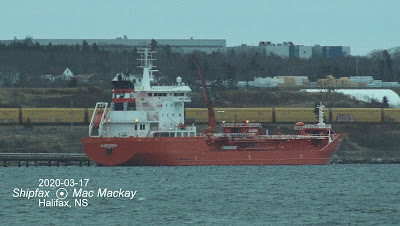 Once it completed its alongside refit in Quebec, it loaded at Valero and headed for Halifax. It is not unusual for the oil companies to acquire product from each other. Interestingly Algoma fleet mate Algoscotia sailed from Halifax March 8 for Houston, TX - another source of product.

Also arriving, but for Irving Oil is Sarah Desgagnés (again) from Saint John.

(Ah - finally a bow shot). This is Sarah's second visit recently. It is  taking up the slack in Irving's own fleet as their Canadian flag tanker East Coast is in drydock in Setubal, Portugal. It sailed from here February 24, see: http://shipfax.blogspot.com/2020/02/tankers-something-for-everybody.html
and arrived in Setubal March 5.