The mysteriously named Kibaz arrived at Irving Oil this afternoon. A fairly typical Mid Range tanker of 28,517 gt, 47,094 dwt, it was built in 2004 by Onomichi Zosen in Japan as Balzo. It acquired its current name in 2016. A nearly as I can tell its ownership may be in India, through International Andromeda Shipping. (Its official owner is listed as Kibaz Shipping LP). It is also listed as a member of the UPT Pool, but that site appears stale. 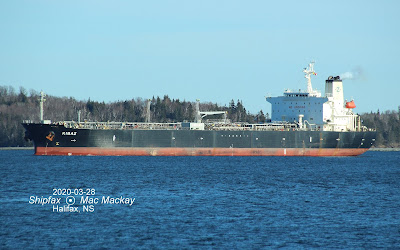 Kibaz carries a "Z" on its funnel, possibly for Zenith Shipping or possibly even from Zorca Shipping, its first owners. The ship arrived from Amsterdam where Irving Oil has terminal storage.

[Yes I did have to leave my house to take this photo, but I did not come into direct contact with other humans in doing so.]