Services such as shipping continue as much as possible to deliver essential goods, and they must do so safely. 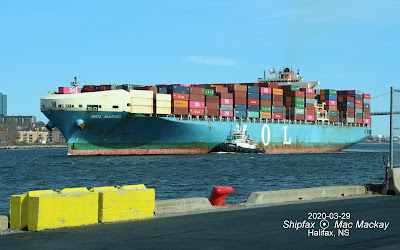 .
MOL Marvel arrives in Halifax for the first time, with a whole variety of cargo. The ship, measuring 78,316 gt, 79,460 dwt, was built in 2010 by Mitsubishi Heavy in Kobe. In 2015 it was fitted with an experimental screen forward aimed at reducing CO2 emissions by 2% by reducing wind resistance (while the ship was steaming at 17 knots). It has the added benefit of protecting containers stowed forward. 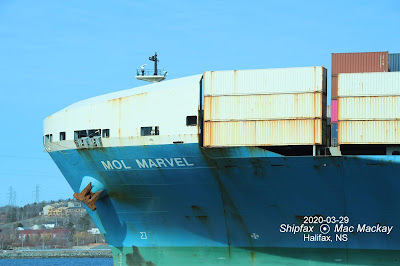 The ship's capacity of 6724 TEU (including 500 reefers) may have been reduced somewhat since the white containers just aft of the screen do not appear to be revenue boxes, but part of the screen. No other ships of the "M" class have been fitted with similar screens, so the results of the experiment may not have lived up to expectations.

For ships to navigate safely aids to navigation such as buoys must be maintained, and spring is usually the time to change then out as winter can be particular hard on them. Others are removed from service for the winter due to ice and are reinstated in spring.

CCGS Sir William Alexander sets this afternoon out for the eastern shore with a deck load of buoys. Having to dodge a solo sailor is a bit odd for this time of year, but the same boat has been running for all winter. (I took a photo of it on February 23: http://shipfax.blogspot.com/2020/02/an-unusual-winter.html ) 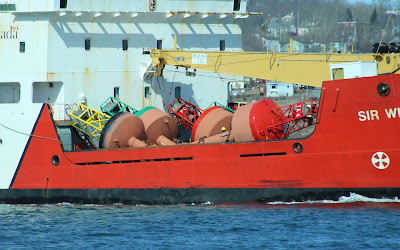 Only two of the buoys are identifiable. TA4 for Flying Point and PQ4 for Horne Shoal in the Port Felix /Dover areas.

Another arrival, just getting into the inner anchorage before dusk, was the tanker Tower Bridge. It is coming from Saint John, NB with a part cargo from Europe, but will have to wait until yesterday's arrival sails from Irving Oil's Woodside terminal.

Of typical MidRange size at 27,725 gt, 47,199 dwt the ship is a bit unusual however in that it was built at the Admiralty Shipyard in St.Petersburg. It is operated by the Russian company SCF. Despite the admonishment that Safety Comes First, the company initials represent Sovcomflot. Originally a soviet state owned shipping combine it has been a joint stock company since 1988.