Much has changed in the ship re-fueling business, not only in the types of fuel now required by international law, but by how fuel is delivered to ships in Halifax.

Since late 2018 ships wishing to refuel in Halifax must tie up alongside at Irving Oil in Woodside, or Wilson's Fuel at Pier 9, where fuel can be delivered to the ship by pipeline. Ships can also tie up at commercial piers where fuel is delivered by trucks. There is no longer the option to receive fuel while at anchor. The last bunkering tanker to serve Halifax, the Algoma Dartmouth now works in Saint John, NB where it can access a supply of fuel directly from the Irving Oil refinery.

There are no oil refineries in Halifax anymore, and all ships' fuel that is available here must first come from another port. Irving Oil has contracted to supply fuel to the Royal Canadian Navy. The RCN's hired supply / tanker Asterix is alongside at Irving Oil this morning.

I covered the history of fuel bunkering in Halifax in two previous posts, which require a little updating.

The tanker barge Halfueler was shown again in a post yesterday Tuesday after I recently discovered another photo in my negative file. As recounted in the 2013 post, the ship was acquired by Marine Industries Ltd when it purchased the Foundation Company tugs.  MIL had a large dredging contract on the St.Lawrence and renamed the tanker MIL Fueler with the intention of using it to refuel dredges. The general consensus is that they never used it and it was broken up in Louiseville, QC in 1978.

Fifty years ago, with Halfueler out of service,  Imperial Oil decided to take over the bunkering business in Halifax again. They ordered a specially designed vessel from Collingwood Shipyard. In the meantime they assigned one of their ancient tankers to Halifax. Imperial Cornwall was a steam tanker, built in 1930 as Acadialite and renamed in 1947.  Although it had crossed the Atlantic from its builders, Furness Shipbuilding, Haverton Hill-on-Tees, it was really a canal boat normally confined to the Great Lakes. 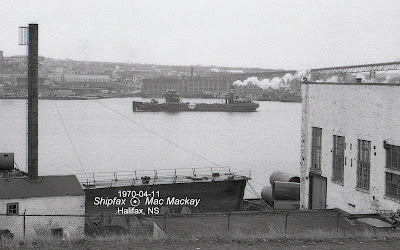 Imperial Cornwall passing the Graving Dock gate at Halifax Shipyard, en route to Nova Scotia Power's Tuft's Cove generating station. Although built to burn coal or oil the new plant only burned oil until it was converted to gas. Imperial Oil ran a steady shuttle from its Dartmouth refinery to the plant and another plant at the foot of Morris Street in Halifax. 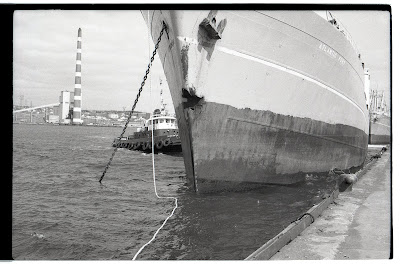 Now boasting three chimneys, the Tuft's Cove pant was built with only one. The enclosed and ramped conveyor, was to load coal, but was never used and later removed.
In this photo the tug Foundation Vim berths Atlantic Fury at pier 9C in 1970. The ship had apparently met up with some hard object.

Imperial Dartmouth was delivered late in 1970 and served until 2006 when it was sold to Northern Transportation. Renamed NT Dartmouth it worked under contract to Imperial Oil Ltd until July 2009. 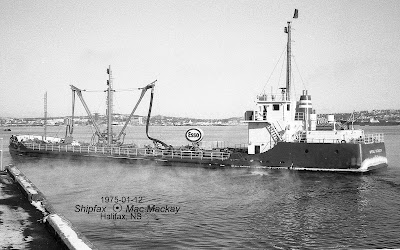 The vessel was laid up in Newfoundland until 2012 when it was renamed Dartmouth under the Honduran flag. New owners Atlantic Pacific International were to operate the ship under the Caribbean Petroleum Services SA banner. In 2012 they renamed the ship Emporio under Panama flag. Last reported en route to Aruba in 2013, its current whereabouts are not traceable on the internet.

Replacement vessel Algoma Dartmouth began work in Halifax in 2009 and was transferred to Saint John, NB in 2018 without change of name. It still operates there. 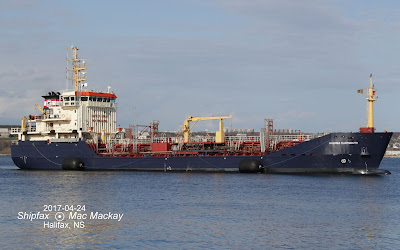