T as in Tulane

Not a pun on the how its cargo gets from point to point, but the continuation of a Wilhelm Wilhlemsen corporate tradition of naming its ships with the letter "T".  Tulane is the third ship in the company to carry the name of the New Orleans University. It arrived this morning for Autoport with another cargo of cars.

The tug Atlantic Willow makes up alongside Tulane as it arrives. Another auto carrier, Grande Halifax waits offshore until tomorrow when it is scheduled for Autoport.

Of a more conventional type of ship E.F.Ava arrived from Iceland and sailed for Portland, ME for Eimskip. As a reminder that it is still winter in some places, the ship carried a coating of frozen spray forward. 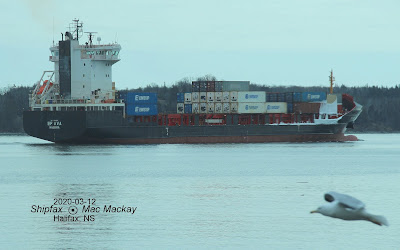 Generations of Halifax gulls have made their marks in my photos (and on my cars). Credit given where credit due.