The Canada Steamship Lines self-unloading bulker Baie St. Paul arrived last evening at pier 9C for a maintenance period. Unlike Great Lakes ships of previous years which laid up for the winter, this ship has been running continuously, along with some of its sister vessels. It has been carrying mostly salt from the Magdalen Islands, and has ranged as far as St.John's, NL. 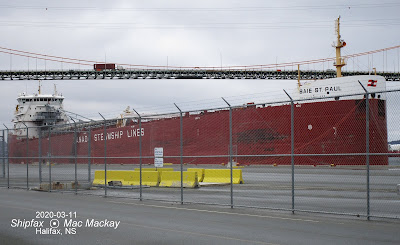 Baie St. Paul is one of CSL's Chinese built Trillium class, of which there are two types. One group is strictly ocean going, with four 71,000 dwt self-unloaders. The other consists of six ships sized to suit the St.Lawrence Seaway. Of these four are self-unloaders of 34,500 dwt and two are gearless bulkers of 36,364 dwt. Post construction modifications have allowed some of the ships to extend their range for short ocean voyages. Apparently they are also suited for navigation in ice.

With the St.Lawrence Seaway scheduled to open soon, ships are taking advantage of a lull to prepare for a busy summer season ahead. Extreme high water levels on the Great Lakes have caused greater than average discharge through the upper St.Lawrence River., resulting in dangerous currents around the locks. Consequently the Seaway opening date has been delayed from the usual March 20 (approximately) to April 1.

It will be interesting to see if Baie St. Paul will take a load of gypsum to the Lakes, and return with a load of grain for Halifax. On its last visit to Halifax it loaded gypsum. See http://shipfax.blogspot.com/2019/06/new-laker-on-block.html

Rumours abound that Baie St. Paul has replaced Atlantic Huron, which has been laid up in preparation to be sold for scrap. These rumours are not new, so until Atlantic Huron is away under tow, I would not bet on them.