Shipping took on the look of normal activity today despite some major uncertainties resulting from the spread of the Covid-19 virus and delays caused by the now ended rail blockades.

Maersk Patras several days off schedule (it would normally have called on Saturday) made its visit to PSA Halifax. 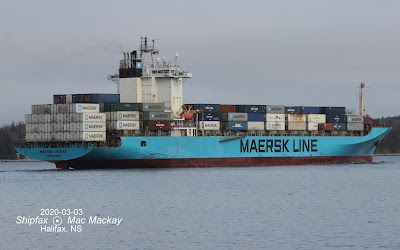 Maersk Patras is one of four ships that maintain the Canada Atlantic Express service (Bremerhaven-Rotterdam-Antwerp-Montreal-Halifax)  in association with CMA CGM.

X-Press Makalu also arrived but anchored on the lower harbour. It will move to PSA Halifax tomorrow for Melfi Marine, en route to Cuba. With prior stops in Italy and Spain in mid-February it likely was not subject to any quarantine measures. Could that be why the CBSA was taking such an interest in it this afternoon, sending a launch out for an inspection?

The ship is due to move to PSA Halifax in the morning. It may take away the last of a colourful cargo that has been on the docks all winter. Trucks for Cuba's fruit and nectar distribution company La Estsancia (loosely translated as the ranch) have been awaiting transport since December. (Some left on last month's Melfi call.) 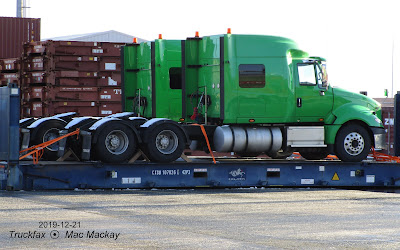 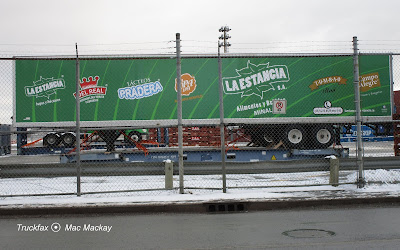 A Quebec company that specializes in reconditioning and exporting trucks has prepared a number of tractors and semi-trailers in La Estancia's colourful green. Since Melfi does not have a RoRo capability, the vehicles have been strapped down to container flats. Most appeared to be low mileage units returned off lease.